Kuwait detains several people on suspicion of spying for Iran 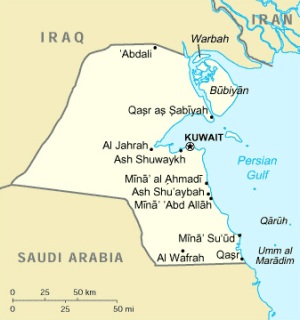 Kuwait has detained several people in a security probe, a government spokesman said Monday, following media reports that a number of Kuwaitis and foreigners were being held on suspicion of spying for Iran.

Kuwaiti media, including independent daily newspaper al-Qabas, have reported that a number of Kuwaitis and other nationals were arrested for gathering information for Iran on military sites in the Gulf Arab country. Iran has denied the reports.

Asked about reports in the Kuwaiti press on the case, spokesman Mohammad al-Busairi told reporters in parliament: “There are suspects and they are under investigation.”

“We cannot go into details … on such national security issues because that would undoubtedly negatively affect investigations,” he said, adding the men would be referred to prosecution as soon as the probe was completed. He did not provide details of how many people were in custody.

Busairi’s reserved comments, which did not mention Iran by name, were the first official confirmation of the reports although he said details published in the media were inaccurate.

Al-Qabas had said that the cell had spied on Kuwaiti and U.S. military installations for Iran’s elite Revolutionary Guards.

The Iranian Embassy said in a statement Sunday the report was baseless and aimed at harming ties between the two countries, and “diverting the attention from the real threat to the area,” which the embassy said was Israel.

Kuwait’s ties with Iran soured during the 1980-88 Iran-Iraq war because of Kuwait’s financial backing of Baghdad’s war effort. But relations have since improved.

Kuwait, which has a Shi’ite minority, supports a peaceful resolution to the standoff between the Islamic Republic and the West over the former’s nuclear ambitions.

Although it has been a major ally of Washington since the Gulf War, it has said it will not allow the U.S. military based in Kuwait to use its land or airspace to attack Iran.

Expulsion of the Iranian ambassador

Several Kuwaiti lawmakers on Sunday called for the expulsion of the Iranian ambassador in the pro-US emirate and the withdrawal of Kuwait’s envoy from Tehran.

Two Lebanese residents of Kuwait have reportedly played an important role in the spy cell working for Iran’s elite Revolutionary Guards Corps, with one financing it, according to Kuwait’s al-Qabas newspaper.

The daily that the cell included six Kuwaitis and two Bedouins( stateless Arabs) and two Lebanese men. The two Lebanese are still on the run.