by yalibnan
601
US President President Obama won the unstinting support Monday of one of the world's most prominent leaders. And he is not going to be happy about it.
Share: 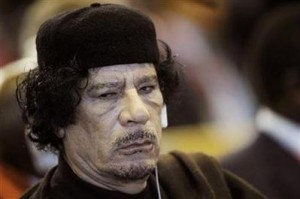 President Obama won the unstinting support Monday of one of the world’s most prominent leaders. And he is not going to be happy about it.

The dilemma becomes apparent upon revealing the name of this enthusiastic admirer: His Excellency Brother Leader Moammar Gaddafi, Guide of the First of September Great Revolution of the Socialist People’s Libyan Arab Jamahiriya. His 40 years on the world stage have included such highlights as the bombing of Pan Am Flight 103. More recently, the man Ronald Reagan dubbed the “mad dog of the Middle East” showed up in New York, where he attempted to live in a tent during the annual U.N. meeting, at which he spoke 85 minutes beyond his 15-minute allotment, ripped up a copy of the world body’s charter, mused about the assassination of John F. Kennedy and suggested that the U.S. military created the swine flu.

And now he is professing Obama love. “I really endorse and support the policies that he has adopted so far,” Brother Leader said Monday afternoon in a video teleconference arranged by the World Affairs Councils of America. Gaddafi referred affectionately to the president as “our son Barack Obama,” helpfully translating Obama’s name from the Arabic: “Barakah — blessing.”

“We would like to greet the American people who voted for their son, Mr. Barack Obama,” Gaddafi, resplendent in a burnt orange cape, informed the audience watching from the National Press Club. Speaking through an interpreter, the colonel continued: “He is from Africa, from an African descent.”

Gaddafi was not done stirring up conspiracy theorists. “The Muslim world welcomed very much the arrival of Obama to the presidency, because the ordinary citizen knows that President Obama is a youth of an African descent,” the Guide of the Revolution added. “He comes from, originally from a Muslim family, maybe even of an Arab origin. . . . And at least psychologically, it was very useful.”

So, on the same day Obama’s national security adviser apologizes for telling a Jewish joke, Gaddafi declares that Obama has a Muslim family and is “very useful” to Libya. Thanks for your support, Brother Leader.

Still, by Gaddafi standards, it could have been worse. Just two months ago, he declared a holy war against Switzerland, of all places. What would he do next — a fatwa against “South Park”? Instead, he answered some questions before ending abruptly. “I think we’ve taken up enough time, and besides, I waited half an hour before you started,” he protested. “Today I’m fasting, so I should break my fast.”

Still, he gave occasional glimpses of the wacky Gaddafi, calling the execution of Saddam Hussein “really sad” and defending his view that women should be “reproducers” and avoid “male vocations.”

Those arriving at the National Press Club on Monday were given copies of “The Green Book,” Gaddafi musings on democracy and socialism published by “the Public Establishment for Publishing” in Tripoli. Soon after the appointed time, televisions in the room showed a live image of Gaddafi, with thin chin beard and mustache, squinting so much that his eyes were slits.

“Relations are really excellent” with the United States, Brother Leader reported. This assessment may come as news to the State Department, where spokesman P.J. Crowley earlier this year characterized Gaddafi’s U.N. speech as “lots of papers flying all over the place, not necessarily a lot of sense.”

Gaddafi said he wants a permanent Arab seat, with veto power, on the U.N. Security Council. He likened the Palestinian plight to what the Jews “suffered under Hitler.” He offered a plan under which Israel, stripped of nuclear weapons, would become a majority-Arab state called Isratine. “I think this is a historical — a final solution,” the colonel declared. A few in the audience chuckled at Gaddafi’s use of the Nazi phrase for the Holocaust.

Still, he saw fit to add, “I am really very keen on the safety of the Jews.”

He was even more keen on the U.S. president. “I’m sure that he will work for the good of America as an American president, but at the same time, he’ll be gaining the friendship of the Arabs and the friendship of Libya for the common interests of those peoples and United States,” the Guide of the Great Revolution judged. Further, Gaddafi called Obama’s statements on the Muslim world “popular” and praised his Iraq policy. He also was pleased that Obama “condemned the war in Vietnam” — though that war ended when Obama was 13. “This is being applauded in the Arab and the Muslim world,” Gaddafi reported.

True, he isn’t happy that Libya wasn’t invited to attend the recent nuclear summit (“it was a political blunder”). And he thinks Iran doesn’t deserve sanctions over its nuclear program (“maybe they are using it for peaceful purposes”). But Gaddafi was even willing to defend his “son” Obama’s escalation of the Afghan war. “As a military person myself, I can understand the military aspect of this,” he said, calling the troop increase “irrelevant” because withdrawal will follow.

Just what Obama needed: The mad dog of the Middle East is his new best friend. Washington Post