by yalibnan
1765
The days of the war will not return, Hariri told the press prior to the football match commemorating the 35th anniversary of the civil war. Hariri's team won 2-0 and Phalange MP Sami Gemayel scored both goals
Share:

The friendly football match gathering the two opposing political camps in Lebanon March 8 and March 14 – kicked off at Camille Chamoun Stadium to commemorate the 35th anniversary of the Lebanese civil war.

They all formed 2 teams . One red and one white… both teams included members of both camps.

MP Sami Gemayel of the Phalange party scored both goals for the team led by Hariri .

The days of the war will not return, Hariri told the press prior to the match.

People from all over the country are participating in the match, said Hariri, calling on all Lebanese to unite.

President Suleiman was at the stadium but did not participate in the match.

Many Lebanese praised the idea.

Rafik , a regular Ya Libnan reader wrote: “Bravo whoever came up with this idea, it’s a winner so this way the public can see the opposing parties can play in a sportive spirit and people will be less tense, I hope whoever organizes this event should make it a regular event”

Here are more pics of this special event courtesy of Dalati Nohra: 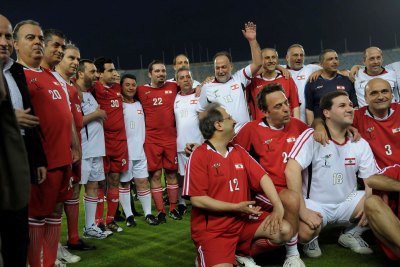 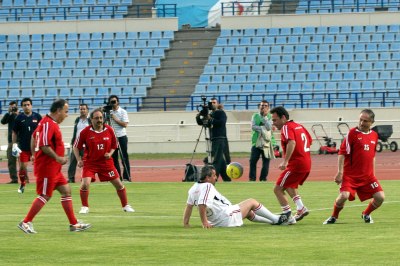 Update: The captain of the white team was MP Ali Ammar