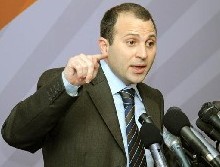 “Holding municipal elections without reforms has led to losing confidence in the government,” Bassil said in an interview published in An-Nahar’s Monday edition.

“It will also lead to lack of confidence among the various political parties,” Bassil cautioned

He criticized the cabinet due to its failure to amend the municipal electoral law.

According to Bassil, holding the municipal elections without the cabinet’s proposed municipal reforms undermines the government’s legitimacy.

He reiterated his support for the adoption of the proportional-representation system during both the municipal and 2013 parliamentary elections.