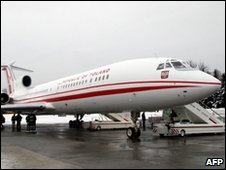 The death of Polish President Lech Kaczynski in a plane crash is likely to raise questions about the 20-year-old Tupolev-154 he was travelling in.

The BBC’s Adam Easton reports from Warsaw that there had been calls for Polish leaders to upgrade their planes.

And in late 2008 Mr Kaczynski had suffered a couple of scares. Problems with the aircraft’s steering mechanism delayed his departure from Mongolia, forcing him to take a charter flight to Tokyo, and a week later the plane was caught up in turbulence flying to Seoul.

However, the aircraft had recently undergone a major overhaul and Aleksey Gusev, the head of the maintenance plant that carried out the work, told Polish TV that it should not have had technical problems.

“From the moment it entered service, the plane had had 5,004 flight hours and 1,823 landings, which for aircraft of this class is not a lot,” he said.

“The plane was flying quite well and there were no complaints.”

The overhaul was completed in December and included repairing the plane’s three engines. The next major service was due in six years.

The Tupolev-154 was for more than a quarter of a century the backbone of Russia’s and the Soviet Union’s air transport system.

It carried about half the number of all passengers flown by Russia’s national carrier Aeroflot and its successors in that time, with that number peaking at 137 million per year in 1990.

About 1,000 were built, and some remain in service in Russia and countries that were once part of the Soviet bloc.

The aircraft entered service in 1972 and was “modernised” in 1986, with new engines and equipment to improve its fuel consumption and flight operations.

But as an indication of its ageing design, the Chinese government decided in 2001 to withdraw the Tu-154 from its airlines.

Aeroflot took the decision to phase them out more recently, saying their high fuel consumption made them uneconomic.

An expert on Russian aviation, Paul Duffy, assessed the safety record of the Tu-154 in 2004, for the BBC News website.

Of 28 lost in accidents up to that date – a figure about normal for the quantity, years of service and technology of the type, in his view – few had crashed because of technical failure, he said.

“The Tu-154 operates in regions with not very good air traffic control and navigation equipment, and in very difficult weather conditions,” he said at the time.

Some of the accidents had little relation to the aircraft itself, he added.

For example, in 1982, an aircraft landing at Omsk in Russia in a heavy snowstorm hit six snowploughs that had not been told to leave the runway as the aircraft landed.

About five had been shot down by enemy or terrorist attacks in Lebanon, Georgia and Afghanistan during the civil wars in those countries.

In 2001, a Tu-154 crashed into the Black Sea after being hit by a Ukrainian missile fired during exercises.

One landed safely in a field after its cargo of cigarettes caught fire but was completely burnt.

Another ran out of fuel five miles short of the runway when the state airline of an almost bankrupt country decided to carry less fuel from its base, where the price was high.

And Swiss air controllers accepted full responsibility for a mid-air collision between a Tu-154 and a cargo plane in July 2002.

The Tu-154 is now no longer in production.

BBC Moscow correspondent Richard Galpin says Russian airlines are not interested in newer Tupolevs because they are not comparable with Western planes.

Aeroflot is now buying the vast majority of its aircraft from Boeing and Airbus. BBC