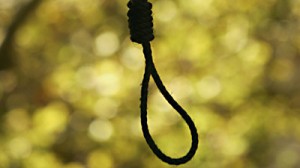 The wife of a Lebanese man facing a death sentence in Saudi Arabia for “sorcery” pleaded for mercy Thursday as Lebanon’s justice minister asked the kingdom’s rulers to halt his beheading.

Family members have been told that Ali Hussain Sibat, who used to offer predictions and advice to callers on a Lebanese television network, is scheduled to be put to death Friday. His wife made an emotional plea for his release during a CNN interview Thursday.

“All I ask is for the Saudi king and the Saudi government to show him mercy — let him come back to his country and his family,” Samira Rahmoon said.

Sibat was arrested by Saudi Arabia’s religious police and charged with sorcery while visiting the country for an Islamic pilgrimage in May 2008, according to May El Khansa, his attorney in Lebanon. Saudi authorities have not disclosed details of the charge for which Sibat has been condemned and have not responded to requests for comment on the case.

“We can’t understand how they could arrest him and charge him and sentence him to death,” Rahmoon said. “It doesn’t make any sense.”

El Khansa said Wednesday that she had been told about the upcoming execution by a Saudi source with knowledge of the case and the proceedings. Lebanon’s government says it has no confirmation that his execution has been set. But Justice Minister Ibrahim Najjar said he has asked the Saudis to halt any scheduled execution and release Sibat, calling the punishment “disproportionate.”

Video: Man gets death for sorcery

“I have asked them not to implement any execution in this case,” he said. “As far as I know, such an act doesn’t deserve such a punishment, unless there is something else — something that I have not had the possibility to study or to examine myself.”

Rahmoon said the family has been unable to contact Sibat “for a long time” and has received no official notification that her husband’s execution date has been set.

“We don’t understand how he could be executed without us getting any notification first,” Rahmoon said. “How could they decide to execute him and not inform us?”

A law against witchcraft remains on the books in Lebanon, but is the equivalent of a misdemeanor, Najjar said.

“I respect the law of Saudi Arabia, which is based on Sharia law,” he said. “But at the same time, I’m very concerned about such a sentence.”

Sibat was convicted by a court in Medina and sentenced to death in November, El Khansa said. He appealed, and his case was sent back to the trial court for reconsideration. But the judges in Medina upheld their original verdict in March, she said.

The human rights group Amnesty International has called for Sibat’s release. His case drew a small knot of protesters from a Lebanese youth group to the Saudi Embassy in Beirut on Thursday, and Najjar said he told his Saudi counterpart that beheading Sibat “would not be productive” to Lebanese-Saudi relations.

“I have done what I thought was responsible for the justice minister in Lebanon to do, and I said to my colleague in Saudi Arabia that such an act in Lebanon would not be sanctioned by more than two months of imprisonment,” Najjar said. CNN