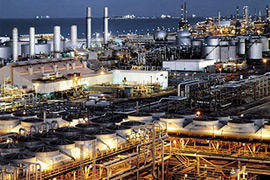 Saudi Arabia, the world’s biggest oil exporter, has arrested about 100 people suspected of having links with al-Qaeda, the interior ministry has said.

A statement from the ministry on Wednesday said the suspects were plotting attacks on oil and security installations in the kingdom.

One cell consisted of 101 people, and two smaller cells were made up of six men each.

The large cell comprised 47 Saudis and 51 Yemenis, as well as a Somali, a Bangladeshi and a Eritrean, said a statement read out on state television.

The two smaller groups were made up of 11 Saudis and a Yemeni, who security officials described as being a prominent member of al-Qaeda.

The groups had links to an al-Qaeda affiliate based in neighboring Yemen, Mansour al-Turki, a ministry spokesman said.

He said a “network” and two cells working independently of each other had been uncovered.

The large cell was discovered as the result of an investigation launched after suspected al-Qaeda fighters – two of them dressed as women – tried to infiltrate the country in October with explosives.

The two were killed in a shootout at the border and a third was arrested.

He said weapons, cameras, documents and computers were also seized.

The suspects were organized in three cells, two of which were planning to attack oil and security facilities in the oil-producing Eastern Province.

Each of the two small cells were said to be linked to Yemen-based al-Qaeda in the Arabian Peninsula (AQAP) and tasked with targeting oil installations.

“The network and the two cells were targeting the oil facilities in the Eastern Province and they had plans that were about to be implemented,” al-Turki said.

The foreigners in the cell were said to have entered the country under the pretence of seeking work or visiting Muslim holy sites in Mecca and Medina.

The group was preparing to perpetrate “acts of terror” in the kingdom, a security official has said.

There has been no official disclosure on which oil installations were being targeted and whether they were foreign or Saudi-owned.

“We seized belts of explosives which they were planning to use in suicide attacks,” the security official said.

Most of the suspects were arrested in the southern province of Jazan, near the border with Yemen.

The dates of the arrests were not disclosed.

In 2003, suicide bombers suspected of having links with al-Qaeda killed 35 people in the capital Riyadh.

But a security crackdown helped curb violence inside the kingdom after 2006.

In 2007, officials said 172 terror suspects had been arrested; and in August 2009 44 suspects with alleged links to al-Qaeda were detained.

Khaled al-Maeena, the editor-in-chief of Arab News, an English language daily newspaper, told Al Jazeera that the details of these arrests are still coming in.

“The Saudi ministry of interior and the government are in a relentless fight against all those who create mayhem, confusion and are propagators’ of violence.

“I think we did expect that the crackdowns will come because the government would really like to have this as a terrorist-free country and all those who break the law will be punished,” he said.

Riyadh is especially concerned about the resurgence of AQAP in Yemen, where government crackdowns on the group have been ineffective.

In September, Michael Leiter, director of the US National Counterterrorism Centre, said the AQAP group has gained a dangerous foothold in Yemen.

“We have witnessed the re-emergence of al-Qaeda in the Arabian Peninsula, with Yemen as a key battleground and potential regional base of operations from which al-Qaeda can plan attacks, train recruits and facilitate the movement of operatives,” Leiter said.

“In domestic policy, the government continues to expend its efforts to strengthen security,” he said in his annual speech to the Shura Council, the country’s consultative assembly.

“A special effort has been made to confront the thinking of the group of deviants, extremists and terrorists,” he said, using language the government usually employs to identify al-Qaeda.

“The security services have had repeated successes with preventative actions, and will continue their activities to foil the terrorist plots, eradicate the deviant groups, and dry up the sources of terrorism,” he said. Aljazeera