Clinton: Israel is hurting US credibility 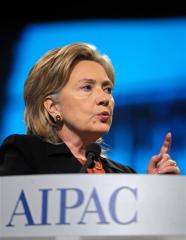 Israel recently announced new housing plans for east Jerusalem, an expansion that the Obama administration has strongly criticized. Clinton renewed that disapproval, telling a pro-Israel audience that provocative Israeli land policies in areas claimed by the Palestinians are not in Israel’s long-term interests.

Netanyahu was to speak to the same American Israel Public Affairs Committee that Clinton addressed earlier.

The spread of Jewish homes on land claimed by the Palestinians threatens the Obama administration’s first attempts at shuttle diplomacy intended to establish an independent Palestinian state, Clinton said, and makes it hard for the United States to be an honest broker.

“Our credibility in this process depends in part on our willingness to praise both sides when they are courageous, and when we don’t agree, to say so, and say so unequivocally,” Clinton said.

Obama has remained out of the fray as Clinton and other U.S. officials have rebuked Israel for a particularly large housing announcement that seemed timed to embarrass the United States and perhaps to smother the new talks with a U.S. go-between before they began. The talks would be the first formal peace efforts since election of a Democratic administration in Washington and a hawkish one in Israel.

A meeting Tuesday at the White House will be Obama’s first with the Israeli leader since the severe diplomatic breach over the housing announcement earlier this month.

“We objected to this announcement because we are committed to Israel and its security, which we believe depends on a comprehensive peace,” Clinton said.

Netanyahu’s remarks were likely to be more warmly received by the audience.

Besides addressing the land question, Netanyahu also planned to make a case that Iran’s acquisition of nuclear weapons threatens to spell the end of the era of “nuclear peace” that the world has experienced since the end of World War II, Regev said.

Clinton assured Israel that the U.S. administration’s commitment to its security and future is “rock solid” despite the division over the continued expansion of Jewish housing. Palestinians claim that the expansion is a land grab that will be impossible to roll back, leaving them less space and less desirable outlines for a future state alongside Israel.

“New construction in east Jerusalem or the West Bank undermines mutual trust and endangers the proximity talks that are the first step toward the full negotiations that both sides want and need,” she said.

“It exposes daylight between Israel and the United States that others in the region hope to exploit,” and undermines what she called an essential U.S. role as mediator.

The Israeli announcement came while Vice President Joe Biden was visiting the country. It embarrassed Biden, usually a staunch supporter of Israel, and led to new stress in relations between Washington and its top Mideast ally.

Clinton said talks with Netanyahu on steps Israel can take to restore confidence were under way.

Netanyahu has outlined some steps his government is willing to take, but he said on Sunday that Israel would not halt construction in Jewish neighborhoods in east Jerusalem.

Some Israeli officials say that while there will be no formal freeze, construction may be restricted, as in Netanyahu’s partial 10-month West Bank construction freeze.

The steps have not been made public, but officials say another element is agreement to discuss all outstanding issues in the proximity talks that Mitchell is to mediate. Those would include the future of Jerusalem, borders, Jewish settlements and Palestinian refugees.

Clinton got a polite but muted response to most of her remarks, and loud approval when she talked tough on Iran.

The secretary said the Obama administration would not accept a nuclear armed Iran and is working on sanctions “that will bite” concerning its suspect atomic program.

Clinton said parts of Iran’s government are “a menace” to the Iranian people and the Middle East. Israel considers Iran a mortal threat in its back yard, especially since the development of better Iranian missiles and the advancement of Iran’s nuclear program to the point where a weapon could be feasible.

Iran says it is not building a weapon. AP