Syria using the camps as an excuse to return to Lebanon 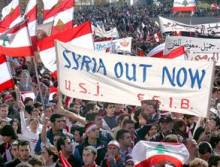 Syria is reportedly using the security situation at the Palestinian refugee camps as an excuse to return to Lebanon.

Al-Akhbar newspaper , which carried the report, said Syria, Lebanon as well as some Palestinian figures have received several messages from the West warning against the outburst of violence in refugee camps in Lebanon.

The messages , according to Al-Akhbar , have demanded that Syria help contain the situation in Lebanon refugee camps.

Damascus expressed readiness to meet the West’s demand, but requested an amendment to the structure of Lebanon’s security in order to make security institutions “cooperative and responsive” to the Syrian leadership.

Syrian troops withdrew from Lebanon in April 2005 following the assassination of Lebanon’s former PM Saad Hariri after 30 years of tutelage but continued to exercise its influence through its Lebanese allies and the militant Palestinians .

According to observers Syria is behind the violence at the camps and is using them now as an excuse to return through the back door to Lebanon.