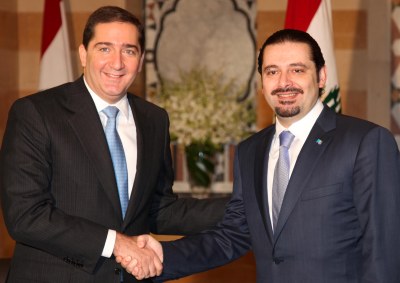 Jordanian Prime Minister Samir al-Rifai is in Beirut at the head of a high-level ministerial delegation to sign several agreements with Lebanon in various fields.

The Jordanian delegation includes the agriculture, education and transport ministers in addition to assistants and advisors.

Hariri and his Jordanian guests later met at the Grand Serail and discussed details of the talks that will be held between the Lebanese and Jordanian sides on Friday afternoon.

Following the meeting with Hariri , the Jordanian delegation met with President Michel Suleiman at Baabda palace.

Suleiman and Rifai have reportedly touched on the latest regional developments, including the recent clashes in Jerusalem between the Palestinians and Israeli police after the Jewish State decided to build 1,600 new units in disputed East Jerusalem.