Hariri: None of the wars with Israel was ever launched by Lebanon 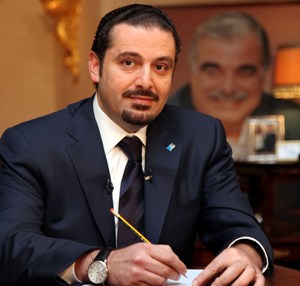 In an exclusive interview on Friday Lebanese Prime Minister Saad Hariri told DPA the failure of the international community to solve the Israeli-Palestinian conflict is at the heart of Lebanon’s tense relationship with the Jewish state, which is constantly searching for a pretext to attack Lebanon.

“War in the region has never been due to a decision taken by Lebanon. Any war is a direct result of inaction on the part of the international community and the failure to move seriously on the peace process,” the 39-year-old son of assassinated Lebanese Premier Rafik Hariri said in Beirut, ahead of a three-day visit to Germany starting Sunday.

Israel and Lebanon have traded threats in recent months over the apparent build-up of forces by Hezbollah along the border between the two states. In 2006 Israel invaded southern Lebanon and bombed Beirut in response to what it saw as the Hezbollah threat.

Hezbollah and Lebanon’s other political factions have returned to the so-called National Dialogue despite tensions over the fact that Hezbollah — now a part of the government — refuses to concede that it having its own heavily armed militia is at odds with democratic politics.

Hariri brushes over the arms issue.

“This is not the first time that Hezbollah has been part of the government. This goes to show how the Israelis are always looking for pretexts. Hezbollah is represented in Parliament as a result of democratic elections.”

The group, which has vowed to keep its arsenal to defend the southern border has 13 members in Parliament and two ministers in Hariri’s government.

Hariri said he will travel on Sunday to Berlin to “discuss the regional situation and how to protect Lebanon from regional conflicts.”

“All wars with Israel, in which Lebanon has been the victim of, have been launched by Israel, not by us, and Lebanon is the one who paid a very high price, in human lives, displaced people and destroyed infrastructure,” Hariri said.

“The problem is that we live in a volatile region. It all boils down to what got us to be in this situation of regional instability, and the answer to that is failure to do anything on the peace process, particularly for the Palestinians and their rights,” he said.

Hariri said his talks in Berlin will tackle ways to boost cooperation with Germany which contributes to the United Nations peacekeeping force that monitors Lebanon’s borders with Israel.

Lebanon’s National Dialogue has the aim of putting in place a defense strategy for the country. Some parties have objected to Hezbollah’s military activities and called for its disarmament.

“Lebanon is a democracy. And any democracy has its differences. Is there unity among the Lebanese on absolutely every single issue? Frankly, no, because in reality this is simply impossible. But there is definitely unity among the Lebanese on dialogue, on managing our differences, and on providing safety and civic rights to our citizens,” he said.

Hariri warned of growing political extremism given the failure to date of the Mideast peace process.

“Today fighting extremism is not the responsibility of one country alone, it is the responsibility of the whole world. In our region, for instance, extremists are unfortunately gaining audience, at the expense of moderates, by simply asking one simple question: Show us one achievement in the domain of Palestinians rights to a state, a capital, a right of return, any domain of their rights, after 62 years of plight, of which almost four decades of attempts at a negotiated settlement,” he said.

Lebanon has suffered a series of terror attacks over the last five years, including the massive bombing that killed Rafik Hariri in 2005. Many have blamed the wave of killings on Syria, which denied the accusations but was then forced to end 29 years of military occupation in Lebanon.

Saad Hariri as prime minister, has attempted to rebuild relations with Damascus.

“Our relations with Syria are on the right track. We are approaching them in a very positive attitude, and we are met with a very positive attitude by Damascus. We are two neighbors, united by Arab identity, and we have common interests in economy, in trade, in security, in culture, and on a regional level, we are facing the same challenges as a result of the absence of progress on peace.”

Hariri said he will be visiting Damascus again “in the coming weeks for more in-depth discussions on all these issues.”

However Hariri awaits progress on the troubled Hague tribunal that has attempted to solve his father’s murder — with a former UN investigator, Detlev Mehlis, saying recently it may never be cleared up.

“I have complete faith in the Tribunal. Whatever the results from it, I will accept.

“This has always been my position, and it will remain the same,” he said. DPA