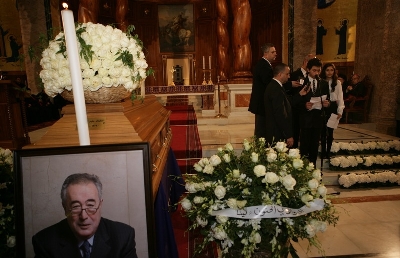 The funeral service for Antoine Choueiri, a prominent Lebanese businessman and media magnate was held at St. Georges Cathedral in downtown Beirut before midday Thursday and was buried the same day in his hometown of Bsharri in north Lebanon.

Choueiri’s funeral was attended by a huge number of relatives, friends as well as government and media officials.

Choueiri , 69 died at Hotel Dieu Hospital in Ashrafieh on Tuesday after a long battle with an undisclosed illness.

Choueiri dominated the media landscape in the Middle East as a representative of some of the major names in the local industry, including Lebanon’s LBC Sat, the Al Jazeera network, the daily newspaper Al Hayat based in London, the UAE’s Dubai Media Inc and Lebanese publications Al Nahar and Al Safir.

With over 38 years of experience in the regional media industry, Choueiri was responsible for managing ad sales for some of the largest broadcasters in the region such as LBC, MBC and Dubai TV. His prevailing influence in the world of television prompted the formation of the GCC Association of Advertisers 4 years ago.

Members of the GCC Association of Advertisers include Emirates Airlines, Unilever and McDonalds. All of the members are said to spend over US 100 million a year on advertising in the region.

Under the guidance of Antoine Choueiri, the Group now operates in 11 markets and consists of 14 subsidiaries. The Group is involved in managing and marketing the advertising space of more than 30 TV and radio stations, print title and billboard signs in the GCC.