A raid on suspected militants in the West Bank was cancelled yesterday after an Israeli soldier updated his Facebook status to read “On Wednesday we clean up Qatanah, and on Thursday, god willing, we come home.” The solider has since, unsurprisingly, been relieved of combat duty for being a moron. He’ll also spend 10 days in prison for his update. 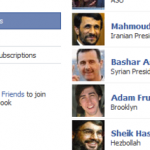 Trying to educate soldiers on the importance of not leaking classified info to Facebook, the Israel Defense Forces have started putting up new posters in bases:

In posters placed on military bases, a mock Facebook page shows the images of Iranian President Mahmoud Ahmadinejad, Syrian President Bashar Assad and Hezbollah leader Sheik Hassan Nasrallah. Below their pictures – and Facebook “friend requests” – reads the slogan: “You think that everyone is your friend?” (Gizmodo)