Lebanese President  Michel Sleiman met  with March 14 delegation at the Baabda palace  to discuss the issue of the national dialogue committee. The delegation was headed by Fares Soueid .

Earlier in the day Minister of State Michel Pharaon  , a key member of March 14 and   a member of the national dialogue committee, told VOL that the committee  should limit its discussions to setting a national defense strategy that all parties agree to.

“In the first session, we should assert the need to abide by the 2006 national dialogue clause pertaining to disarming all Palestinian groups outside the refugee camps, which otherwise would threaten the country’s stability,” said Pharaon.

Pharaon questioned  the president’s choice of  including  Saint Joseph University professor Fayez al-Hajj Chahine’s as Zahle’s representative in the national dialogue committee and  said  that he is trying to get a clarification regarding the matter.

Suleiman’s decision to include Chahine as a committee member caused an uproar within Zahle in the Heart parliamentary bloc which secured a landslide victory in  the June 2009 elections . The bloc  condemned the president’s decision,  calling   it  “provocative in style and substance.”

MP Hadi Hobeich told Future News this morning  that a March 14 delegation that will meet today with the president  will raise several issues regarding the national dialogue.

The issues include Zahle’s representation in the national dialogue, the need to have an Arab League representative at the sessions, and to limit the committee’s discussion to setting a national defense strategy, said Hobeich. 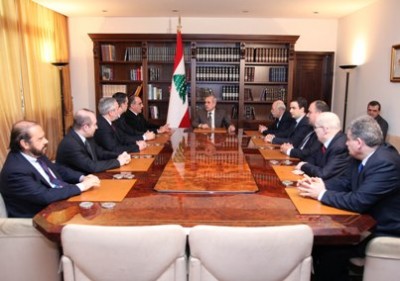