Hariri: peace, stability and security only way to fight terrorism

Lebanon’s Prime Minister Saad Hariri told the Italian newspaper Corriere della Sera in an interview published Sunday :”The only way to fight extremism is through peace, stability and security.”

Hariri stressed that he did not go to Damascus to build a relationship with Syrian President Bashar Assad, but with the Syrians.

Hariri pointed to Italy’s “vital role” in Lebanon and expressed hope that Rome would not cut the number of troops working among the U.N. Interim Force in Lebanon ( UNIFIL).

“We hope Italy would not reduce the number of its troops nor would it change its policy” toward Lebanon, Hariri said.

He wondered why Christians and other people are emigrating .

“It’s because there is no peace, security or stability,” Hariri answered himself, noting the presence of 1 million Iraqi refugees in Syria and at least 500,000 others in Jordan.

“The problem with the Christians,” Hariri explained, “is that they are a small community, and they feel they have to leave.”

Regarding the Special Tribunal for Lebanon, Hariri said the STL did not lose momentum. 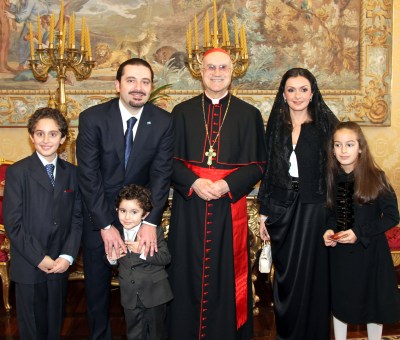