Geagea: Hezbollah has no right to war

by yalibnan
1150
Lebanese Forces Leader Samir Geagea spoke out against Hezbollah and the possibility of an imminent war with Israel, declaring "I am against irrational war."
Share: 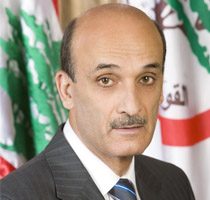 Lebanese Forces Leader Samir Geagea spoke out against Hezbollah and the possibility of an imminent war with Israel, declaring “I am against irrational war.”

The following comments are quotes from Geagea’s press conference.

“Unfortunately, we are discussing again the issue of war. The Lebanese are tired from moving from stability to instability. [Fluctuation between to two] should not be the case in Lebanon, which does not have the resources that great states desire. I would like to focus on Hezbollah Secretary General Sayyed Hassan Nasrallah’s speech on martyr’s day, in which he threatened to hit Israeli infrastructure if Israel strikes Lebanese infrastructure. What Nasrallah said constitutes a plan of a complete confrontation that affects the Lebanese state as a whole.

Above all, the president and the prime minister will bear the consequences of such plan, despite the fact that they did not take part in designing it. How can Nasrallah make a war plan without referring to the [Lebanese] government?

I would have liked for Nasrallah to appoint one of his ministers to meet with the president and the prime minister and inform them on his plan and on the gravity of the situation, so that Lebanon would not seem to be a failed state. Hezbollah took a right [to make decisions] that does not belong to the party, because the right belongs to the parliament that is the representative of the Lebanese people.

When individuals behave independently from the Lebanese state on issues of grave importance, the world would think [Lebanon] is a failed state, and would seek to place us in the custody of other states, which are either Israel, or Syria, or both. Every similar step [to Nasrallah’s proposal] have Arab, regional and international implications on Lebanon.

Hezbollah’s ministers should present to the cabinet party chief Nasrallah’s retaliation plan against Israel stated in his latest speech because only the cabinet is authorized with taking practical decisions to face external dangers.

In light of [recent] threats made by the Israelis, shouldn’t we prepare the shelters and civil defense? The situation in the Middle East is serious and dangerous, and we cannot deal with it lightly.

Let us assume that we strike and they [Israel] in return. What is the outcome? In 2006, the same scenario happened, and the outcome of the war was the death of 160 Israeli against 1000 Lebanese, as well as [material] losses of more than $3-billon. And if you raise the issue with Hezbollah they ask you, What happened?

If war is meant to be waged to reach a particular outcome, we would not mind. But if war is waged just to say that we launched a rocket on Israel, we do not accept that. The real strategy that is requested is to see how Lebanon should isolated itself from any escalation takes place in the region because any war that takes place will not be of our advantage.

I am against irrational war.

The solution is simple. The decisions pertaining to war and peace should be put completely in the hands of the Lebanese state. This is what will help Lebanon avoid war.

If Hezbollah declares that the war and peace decisions belong to the state, we will be able to separate between the rule of the jurisprudent and anything else in Lebanon. Hence, the Lebanese government hence would reject any attack if the decisions was in its hands.

Did Hezbollah’s military presence abolish Israel’s greed in Lebanon? Or did it push Israel to give us back the Shebaa farms? No. On the contrary, it is the government of [former Prime Minister] Fouad Siniora that re-launched the proposal of the Shebaa issue.

Top Hamas official Mahmoud al-Mabhouh was killed in Dubai and Israel is today in big trouble. This shows that power should only be proved through muscle, but also by other measures, especially since we are in the 21st century.” (Now Lebanon)