Small plane crashes into a building in Austin, Texas 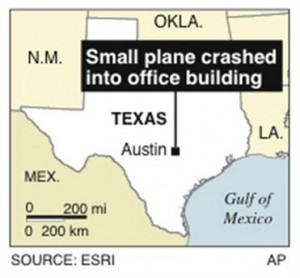 A small plane crashed into a seven-story office building in Austin, Texas, on Thursday.

Reports from the scene were sketchy shortly after the crash, but it appeared from televised images that the plane hit the lower floor of the building alongside Highway 183. Damage to the front of the building appeared extensive.

Witnesses told television reporters that they saw a fireball. Firefighters were seen dousing the building as smoke poured into the sky.

The pilot of the plane had set his house on fire beforehand, stole the plane, a Cirrus SR22 single-engine four-seat aircraft, and crashed it intentionally, a federal official told CNN.

Federal officials said two F-16 fighter jets were launched as a precaution after the crash, though terrorist intent was not indicated.AP, CNN