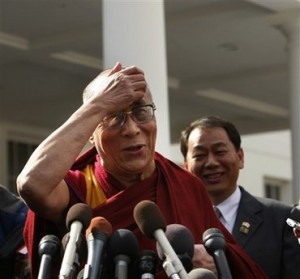 Brushing aside China’s warning, US President Barack Obama has concluded over an hour of private talks with the visiting Dalai Lama at the White House, and the exiled Tibetan spiritual leader declared himself “very happy.”

The Dalai Lama told reporters on the White House driveway that he spoke to Obama about the promotion of human value, religious harmony and the concerns of the Tibetan people. He said Obama was “supportive”. He also urged a greater leadership role for women in the public life of nations.