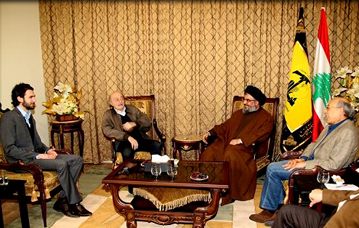 Hezbollah issued a statement on Monday in which it said Nasrallah in the presence of Hezbollah official Wafiq Safa met Jumblatt, who was accompanied by his son Taymour and Minister of Displaced Akram Shehayeb

Neither Hezbollah’s statement nor Al Manar TV mentioned the the exact day of their meeting , but As-Safir newspaper said the two leaders met Sunday afternoon.

According to the Hezbollah  statement, both men touched on the ongoing Israeli threats against Lebanon and Syria, calling on all parties to unite.

Nasrallah is reportedly helping Jumblatt with his visit to Syria