Geagea: March 14 is the vision of Lebanon 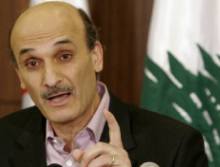 Lebanese Forces leader Samir Geagea stressed during a meeting of the LF in Maarab o the significance of a massive turnout on February 14 to mark the fifth anniversary of the assassination of Lebanon’s former PM Rafik Hariri.

“It is essential to exert every effort toward the success of the Feb. 14 anniversary and to stress that March 14 will carry on until the last goal of the Martyrs of the Cedar Revolution is achieved .”Geagea said

Geagea added : “March 14 is not about specific individuals or parties, it is the vision of Lebanon and a set of goals that should be achieved . ”