by yalibnan
835
The U.S. military is drawing up a new air-sea battle plan in response to threats such as China’s persistent military build-up and Iran’s possession of advanced weapons
Share: 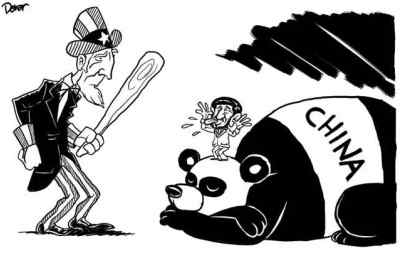 By Viola Gienger and Tony Capaccio

The U.S. military is drawing up a new air-sea battle plan in response to threats such as China’s persistent military build-up and Iran’s possession of advanced weapons, according to the Pentagon’s latest strategy review.

The Air Force and Navy are seeking more effective ways of ensuring continued access to the western Pacific and countering potential threats to American bases and personnel, according to the Quadrennial Defense Review to be released later today.

The joint Air Force-Navy plan would combine the strengths of each service to conduct long-range strikes that could utilize a new generation of bombers, a new cruise missile and drones launched from aircraft carriers. The Navy also is increasing funding to develop an unmanned underwater vehicle, according to the report.

The battle plan is among a range of new initiatives outlined in the review, which is conducted every four years to revise U.S. military strategy for the coming decade or more. The new report places top priority on the fights in Afghanistan and Iraq and against terrorist threats elsewhere, while also preparing for future threats.

“This is truly a wartime QDR,” Defense Secretary Robert Gates wrote in a cover letter for the report. “For the first time, it places the current conflicts at the top of our budgeting, policy and program priorities.”

The review deemphasizes but does not abandon the Pentagon’s doctrine that calls for the military to be able to fight two major wars nearly simultaneously. It acknowledges this mission but says planning should focus more closely on other scenarios, such as irregular warfare including conflicts involving insurgents or drug traffickers and even humanitarian disasters.

“In the mid- to long-term, U.S. military forces must plan and prepare to prevail in a broad range of operations that may occur in multiple theaters in overlapping time frames,” the Defense Department says in the review.

“This includes maintaining the ability to prevail against two capable nation-state aggressors,” it states.

Alluding to China in his cover letter, Gates cites longer- term threats such as “the military modernization programs of other countries.” He also hints at dangers such as al-Qaeda in referring to “non-state groups developing more cunning and destructive means to attack the United States and our allies and partners.”

U.S. officials have often called on their Chinese counterparts to provide explanations and assurances that their moves are purely defensive. The two countries resumed military talks last June, then China halted visits again over the Defense Department’s Jan. 29 announcement of a new arms sale to Taiwan.

China is developing and deploying “large numbers” of advanced missiles, new attack submarines, long-range air defense systems and capabilities to wage electronic warfare and target computer systems, according to the report, which echoes an assessment of China’s military power issued almost a year ago.

China’s refusal to provide adequate assurances of its intentions raises “a number of legitimate questions regarding its long-term intentions,” the Pentagon says in the review.

Citing “more complex” security conditions in the region, including North Korea and terrorist threats in Southeast Asia, the review calls for “a more widely distributed” and flexible U.S. presence in Asia that relies more on allies. Partners would include Australia, Thailand, the Philippines, Singapore, Indonesia, Malaysia and Vietnam.

In the Middle East, Iran is fielding small attack boats in the Persian Gulf, a development that U.S. officials have cited in the past. That compounds the threat to naval operations from the acquisition by Iran and other nations of weapons such as quiet submarines and advanced cruise missiles that can target ships, according to the report.

Iran also has provided drones and shoulder-fired missiles to the Islamic militant group Hezbollah in Lebanon, and Russia and other nations have contributed to the spread of surface-to- air missiles, the department said.

Among the solutions proposed are more ways to deploy U.S. forces abroad, such as naval assets, “in regions facing new challenges.” Existing bases also need to be either hardened to protect against potential attacks or reinforced with back-up locations or by dispersing them in multiple places, the department concluded.

The Pentagon has about 400,000 U.S. military personnel stationed overseas, either in war zones or elsewhere. The review emphasizes “taking care of our people” serving in multiple long deployments that take a “significant toll” on them and their families.

In addition to supporting existing wars, the Quadrennial review emphasizes the need for more unmanned aircraft, intelligence, special forces, helicopters and long-range strike capabilities as well as skills such as foreign languages and training of foreign military forces.

The U.S. military, especially the Navy and Air Force, also should find better and faster ways to strengthen the defense systems of foreign allies and partners as needed, the Pentagon said.

The Pentagon should continue to maintain a nuclear arsenal as a “core mission” until “such time as the administration’s goal of a world free of nuclear weapons is achieved,” according to the report.

The potential threat of cyber attacks and the need to conduct “high-tempo operations” will require more expertise in that field and centralized command of cyber operations, the department said. Bloomberg