ET409: Sabotage or missile attack cannot be ruled out

by yalibnan
1092
It is always upsetting when an event such as a plane crash takes place. So, we have to ask: What may have happened to Ethiopian Airlines Flight 409,
Share:

It is always upsetting when an event such as a plane crash takes place. So, we have to ask: What may have happened to Ethiopian Airlines Flight 409, which departed Rafik Hariri International Airport in Beirut at 2:35 a.m. on a routine flight to Addis Ababa? Witnesses have said the aircraft was on fire prior to going down. However, the only fact we know is that it disappeared from radar a few minutes after takeoff and crashed into the sea only 3.5 km offshore.

The problem is that we have a departing aircraft that is still fully under the control of the local air traffic control (ATC). This control is split into sectors such as arrivals, departures and the tower itself for landing and take off. The airport’s own radar is extremely complex and can identify each aircraft by its squawk code as well as monitor the surrounding weather very accurately. I myself worked in such an environment and used to play games with certain people by telling them it will rain on them in a few minutes, etc.

So what impact does such weather have on aviation and how do these very unique systems develop, especially in a coastal region that makes them so unpredictable? From the operational perspective, the captain is always in charge of his aircraft no matter what the circumstances. Having said that, the captain is fed information from ATC or from his own airline operations controller to help him decide his course of action.

I have always held the greatest respect for thunderstorms, or — in technical terms — cumulonimbus clouds (CBs). I am sure we have all observed this huge cloud formations form; when they reach their full potential they look like a blacksmith’s anvil. They form fairly quickly and almost as quickly die and fade away. If one watches these CBs from a distance, you can see a plume rise up the center, where high energy pushes up through the normal flattened top. Sometime soon after this final burst of energy, the storm cell starts to diminish as its internal energy escapes from the top of the anvil-shaped cloud. The energy within such CBs is remarkable and that is why, in most cases, aircraft take evasive action to avoid them or delay their departure or arrival if at all possible.

My policy always used to be that if such a thunderstorm or CB was directly over the airport, I would ask the captain to delay his arrival or to go into a holding pattern….that is, assuming he had enough fuel to hold for the duration.

So many accidents have occurred as a direct result of these CBs hovering over the vicinity of the runway or, alternatively, when a captain flies his aircraft directly into the active cell of a CB without diverting to avoid them. So let’s look at what these CBs are all about, what lies within, how aircraft can be damaged and what normally happens in routine flight when one encounters these storms.

Inside of a huge CB are powerful forces. You have thunder and lightning, hail and tremendously powerful up drafts and down drafts that demand great respect. The ATC in Lebanon would have seen these on its radar screen and assessed the aircraft departure track as a result.

When an aircraft is arriving or departing, it is under the strict control of ATC. The pilot would have received a pre-flight briefing on the weather conditions while on the ground prior to departure. Upon take-off, his weather radar would have clearly seen the CB’s cells or hearts. This basically means that ATC was aware of the CB and so was the captain. However, upon commencing the take-off run, and for a short time after, the crew is experiencing its highest workload until its departure checks have been completed. In this case, with having close to the shore, the crew had additional workload. 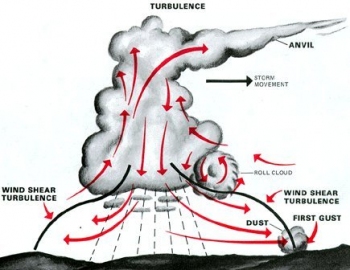 Let’s take a look inside a CB and see what happens, as well as at the equipment available on the aircraft and at the airport. An aircraft entering a microburst will encounter strong headwinds, followed by strong tailwinds, as it flies from one side of the microburst to the other. If the pilot compensates for the headwind (to decrease lift) a bit too much, then the aircraft will lose lift in the tailwind and quickly strike the ground/water. If the aircraft is struck by lightning, this is then dissipated through the aircraft and back into the atmosphere with the assistance of static wicks. Estimates show that each commercial airliner averages one lightning hit per year; however, only one crash has been attributed to a lightning strike. That was in 1967, when the fuel tank exploded, causing the plane to crash. Generally, the first contact with lightning is at an extremity…the nose or a wingtip. As the plane continues to fly through the areas of opposite charges, the lightning transits through the aircraft skin and exits through another extremity point, frequently the tail.

Aircraft are protected from lightning strikes by two things. The first and most important is by a good pre-flight briefing involving both weather forecasters and ATC. The captain must then navigate to avoid such powerful cells. The second is a small device called the “static wick.” Obviously, if the captain is unaware or not prepared and enters such a storm, it is possible for a catastrophic outcome or failure of aircraft components. Sometime, the aircraft can encounter large particles within these cells, resulting in damage to the aircraft.

As we already know, aircraft have in the past disappeared, such as the Air France A330-200 airliner over the South Atlantic on Dec. 1, 2009. That plane possibly encountered tropical thunderstorm activity or severe clear-air turbulence. Many major disasters have also been associated with thunderstorm activity such as a microburst, which is when a sudden down draft (as shown in the above diagram) hits an aircraft flying through it. Aircraft normally land into the wind; however, with such a microburst, the wind can suddenly change into a downward-blowing tail wind. This causes the aircraft to crash into the land or sea. One should always remain vigilant and avoid such storms whenever possible.

When an aircraft is flying from A to B, it will detect such weather on its radar and the pilot will ask the controller to divert from his intended path until the plane has passed the storm. ATC frequently issues such warnings and other aircraft flying in the region pass on such vital information.

The causes behind the loss of this relatively new aircraft cannot yet be determined. However, the fact that it crashed in relatively shallow water will allow the salvage teams to recover the hull and the bodies of missing victims, Map2as well as the black box……only then will the truth be known. On must also bear in mind that sabotage or missile attack cannot be ruled out. All possibilities must be addressed. Sadly, however, this could be a classic case of an aircraft flying into severe weather.

Before leaving the subject of weather and its effects on the aviation industry, I need to explain the complications of coastal weather, when normal weather systems are complicated by locally derived weather, making forecasting extremely difficult.

Coast weather can be very unpredictable, and certainly local knowledge will sometime save the day. One very important factor is called the coastal effect. Moist air drifts in from the sea, then heats as it crosses land and is pushed up over the high ground to form thunderstorms — which then drift back towards the coast. At night. the reverse can happen when the sea gives off heat and forms coastal offshore thunderstorm that can last for considerable time. When all of this is mixed with normal weather systems, you have a very complex picture. However, with good equipment, vigilant air traffic control and a good crew, most disasters can be avoided. As I said before, at the moment we cannot blame any of these factors until the black box has been recovered and the circumstances leading up to the crash have been investigated.

I have included the above chart to show that some time after the crash (which was at around 0235 local time), the offshore thunderstorms were still active. This satellite picture was taken at 0600 GMT, which is 0800 local time in Lebanon.