George Mitchell, the US special envoy to the Middle East, held talks in Syria Wednesday with President Bashar al-Assad, Syria’s official news agency SANA said. Their meeting was expected to focus on the Middle East peace process and Syria-US relations. Mitchell arrived in Damascus from Lebanon, the first stop in his latest tour of the region.

Mitchell, during talks with Lebanese officials earlier Wednesday, stressed that Lebanon would play a key role in building a comprehensive peace in the region.

Mitchell also told Prime Minister Saad Hariri that Washington “will not support the forced naturalization of Palestinians in Lebanon,” according to the embassy. DPA 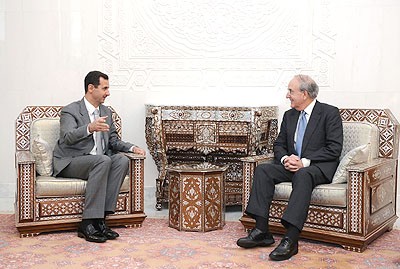