by yalibnan
756
One is enshrined in martyrdom, a prophet of the promise of American equality. Another works in the here-and-now as president of the United States.
Share: 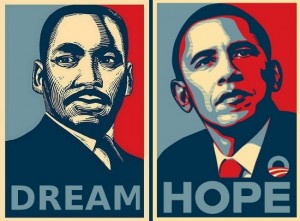 One is enshrined in martyrdom, a prophet of the promise of American equality. Another works in the here-and-now as president of the United States.

“Both (have or) had tremendous responsibilities. And the kinds of decisions both of them make affect (or affected) the lives and hopes of a lot of people.”

With the approach of Martin Luther King Jr. Day on Monday, Young and two colleagues — Forest Wortham, director of the university’s multicultural programs, and Scott Rosenberg, professor of African and African-American history — broached the idea of how well and under what constraints Obama is carrying on the work of King.

“I don’t think their jobs are all that different,” said Wortham. “Metaphorically, Martin Luther King planted the seed. Obama’s the little shoot. It’s finally coming up. We can see a tree, but he’s still got to weather a lot.”

Wortham said Obama is doing for politics what Bill Cosby did for the image of black families: moving another image of black Americans into prime time.

“King was the moral conscience America didn’t want to hear,” said Wortham. Obama, he said, is the visual presence that won’t go away.

Rosenberg worries that having a black president who feels constrained by the necessities of his office from speaking out on race “is almost dangerous in a way.”

Absent of such speech and with Obama’s constant visual presence, “I wonder if it will make us more complacent about civil rights in America,” Rosenberg said.

“The election of Barack Obama didn’t change the lives of millions of inner city blacks in America” or eradicate institutional racism, Rosenberg said.

He was disappointed that Tiger Woods passed up a chance to “seize the moment” when fellow golfer Fuzzy Zoeller made racial marks; so too Rosenberg said Obama’s response to remarks by Senate Majority Leader Harry Reid was “so muted, it barely registered.”

Reid is quoted in a new book about Obama’s presidential run stating that then-candidate Obama was more palatable to American voters because he was “light-skinned” and had no “negro-dialect.”

“To expect Obama to carry the torch of King probably isn’t a fair thing,” Rosenberg said. But “the political realist in (Obama) also has to realize the black vote made the difference” in his election, Rosenberg said.

“How long,” he asked, “can you take that vote for granted?”

Young, who teaches American national government and black politics in the political science department, also sees Obama as being constrained by his position.

Because of the nature of King’s role, he was “willing to make even those who support him uncomfortable,” Young said. “Barack has to be more careful.”

“I know there’s some disappointment” among black voters in the differences between Obama the candidate and Obama the president, Young said. Some, he said, is because “people’s expectations of the president exceed the power of the office.”

“If you (stand up) and lose your seat or lose your position and are replaced” because of a single bill and not be around for a dozen others, it may not be a wise choice, he said.

“I’ve got to think about what I’m willing to sacrifice,” Young said.

Young said Obama and other black leaders “should make the (political) calculation and help the rest of us” — and with a special responsibility in mind.

“It’s not just King, it’s the whole movement,” Young said, including many unremembered people who put themselves in harm’s way to advance the cause.