by yalibnan
1096
By Akiva Eldar The remarkable identification of Israelis with the victims of the terrible tragedy in distant Haiti only underscores the indifference to the ongoing suffering of the people of Gaza.
Share: 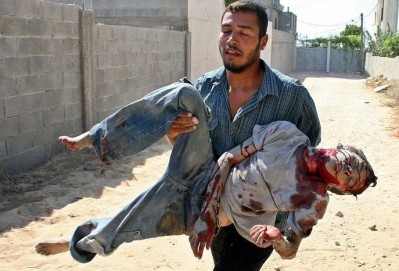 Who said we are shut up inside our Tel Aviv bubble? How many small nations surrounded by enemies set up field hospitals on the other side of the world? Give us an earthquake in Haiti, a tsunami in Thailand or a terror attack in Kenya, and the IDF Spokesman’s Office will triumph. A cargo plane can always be found to fly in military journalists to report on our fine young men from the Home Front Command.

Everyone is truly doing a wonderful job: the rescuers, searching for survivors; the physicians, saving lives; and the reporters, too, who are rightfully patting them all on the back. After Deputy Foreign Minister Danny Ayalon became the face we show the world, the entire international community can now see Israel’s good side.

But the remarkable identification with the victims of the terrible tragedy in distant Haiti only underscores the indifference to the ongoing suffering of the people of Gaza. Only a little more than an hour’s drive from the offices of Israel’s major newspapers, 1.5 million people have been besieged on a desert island for two and a half years. Who cares that 80 percent of the men, women and children living in such proximity to us have fallen under the poverty line? How many Israelis know that half of all Gazans are dependent on charity, that Operation Cast Lead created hundreds of amputees, that raw sewage flows from the streets into the sea?

The Israeli newspaper reader knows about the baby pulled from the wreckage in Port-au-Prince. Few have heard about the infants who sleep in the ruins of their families’ homes in Gaza. The Israel Defense Forces prohibition of reporters entering the Gaza Strip is an excellent excuse for burying our heads in the sand of Tel Aviv’s beaches; on a good day, the sobering reports compiled by human rights organizations such as B’Tselem, Gisha – Legal Center for Freedom of Movement, and Physicians for Human Rights-Israel on the situation in Gaza are pushed to the newspapers’ back pages. To get an idea of what life is like in the world’s largest prison, one must forgo “Big Brother” and switch to one of the foreign networks.

The disaster in Haiti is a natural one; the one in Gaza is the unproud handiwork of man. Our handiwork. The IDF does not send cargo planes stuffed with medicines and medical equipment to Gaza. The missiles that Israel Air Force combat aircraft fired there a year ago hit nearly 60,000 homes and factories, turning 3,500 of them into rubble. Since then, 10,000 people have been living without running water, 40,000 without electricity. Ninety-seven percent of Gaza’s factories are idle due to Israeli government restrictions on the import of raw materials for industry. Soon it will be one year since the international community pledged, at the emergency conference in Sharm el-Sheikh, to donate $4.5 billion for Gaza’s reconstruction. Israel’s ban on bringing in building materials is causing that money to lose its value.

A few days before Israeli physicians rushed to save the lives of injured Haitians, the authorities at the Erez checkpoint prevented 17 people from passing through in order to get to a Ramallah hospital for urgent corneal transplant surgery. Perhaps they voted for Hamas. At the same time that Israeli psychologists are treating Haiti’s orphans with devotion, Israeli inspectors are making sure no one is attempting to plant a doll, a notebook or a bar of chocolate in a container bringing essential goods into Gaza. So what if the Goldstone Commission demanded that Israel lift the blockade on the Strip and end the collective punishment of its inhabitants? Only those who hate Israel could use frontier justice against the first country to set up a field hospital in Haiti.

True, Haiti’s militias are not firing rockets at Israel. But the siege on Gaza has not stopped the Qassams from coming. The prohibition of cilantro, vinegar and ginger being brought into the Strip since June 2007 was intended to expedite the release of Gilad Shalit and facilitate the fall of the Hamas regime. As everyone knows, even though neither mission has been particularly successful, and despite international criticism, Israel continues to keep the gates of Gaza locked. Even the images of our excellent doctors in Haiti cannot blur our ugly face in the Strip.