Palestinian artist Maysara Barood held his latest exhibition in Gaza entitled (White Phosphorus on the birth anniversary of Ailia’a). Ailia’a is the ancient name of Alquds or Jerusalem and also is the name of his son.

The exhibition was held at Rashad El-Shawa Centre in Gaza, where 1400 paintings in white and black were exhibited hanging free like the phantoms of all the people who were the victims of the last Israeli aggression on Gaza. The number of paintings was the same number of the innocent people who were killed by the Israeli offensive on Gaza last year, the attack that left many children disabled, badly burned and disfigured by the white phosphorus bombs used by the Israeli army. globalpost 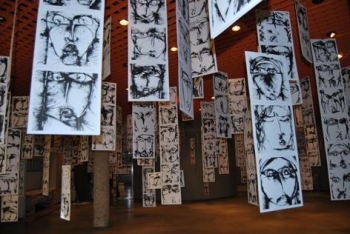