Secretary General of Hezbollah Sayyed Hassan Nasrallah, received Friday January 15, Khaled Meshaal the head of the political bureau of Hamas, accompanied by a delegation that included Mousa Abu Marzouk, Mohamed Nasr, Osama Hamdan. They discussed the situation of the region in general, and Palestinian and Lebanese situation . They criticized the official Arab position in the face of Israeli threats and U.S. pressure. The meeting also stressed the importance of strengthening the Lebanon – Palestinian relations

Both Hezbollah and Hamas are backed by Iran 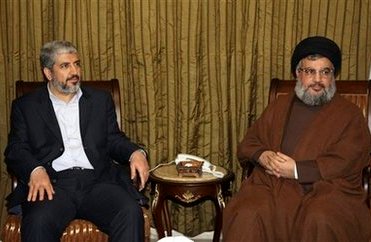