An anti-Egypt rally in southern Gaza turned deadly on Wednesday when demonstrators to the border fence and stoned Egyptian troops on the other side, leading to an exchange of gunfire and the death of an Egyptian soldier. Nine Egyptian soldiers and a dozen Palestinians were wounded from stones and gunfire, witnesses and medics said. NYT 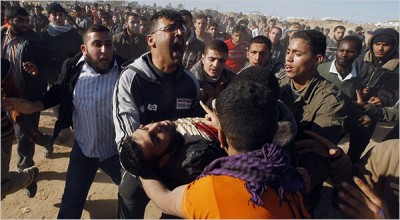 Palestinian demonstrators carried a wounded comrade during clashes with Egyptian troops in the divided border town of Rafah in southern Gaza on Wednesday.