Ali Al Shami: Whose Foreign Minister Is He?

by Ghassan Karam
1689
By Ghassan Karam The unilateral and unauthorized message relayed to the ambassadors of the five permanent members of the Security Council by the Lebanese Foreign Minister did not result in any significant outrage within Lebanon.
Share: 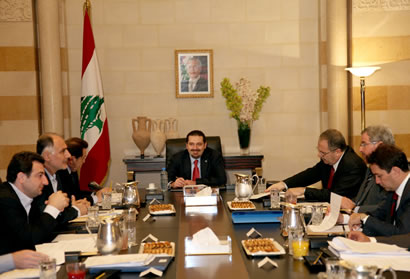 By Ghassan Karam  Special to Ya Libnan

The unilateral and unauthorized message relayed to the ambassadors of the five permanent members of the Security Council by the Lebanese Foreign Minister, regarding his intention to cancel UNSCR 1559, did not result in any significant outrage within Lebanon.  Let me repeat, one of the most senior members of the Lebanese cabinet takes it upon him to convey an unauthorized message regarding a sensitive issue to the ambassadors of five countries? Unfortunately, such irresponsible and unacceptable behavior is to be expected in a Tower of Babel cabinet formation.  What makes this episode even more disagreeable is its timing, right after the visit by the Lebanese Prime minister, Sa’ad Hariri, to Damascus and the failure of Mr. Hariri or his spokesperson to ask for the Foreign Ministers resignation or at least to take him to the shed for a public scolding.

Many of the events that we often label accidents are in effect logical outcomes of an established social or political structure that makes them inevitable.  Major oil leaks such as the Exxon Valdez in 1989 are not accidental and cannot be prevented as long as the commercial and economic system in the world insists on transporting huge amounts of oil in large tankers across vast distances. In the same way that reliance on such a method of transportation can best be described as an accident that is waiting to happen, the current make up of the Lebanese cabinet is an exercise in ineffectiveness, incongruity and incoherence. When each of the factions marches to a different drummer the result is bound to be similar to what we have witnessed last week, inconsistent and incompatible decisions.

The alleged insolent act by Foreign Minister, Shami, is so much more disrespectful of the cabinet that he has sworn allegiance to since his action seems to have been geared to satisfy the requests of a foreign head of state. Apparently, Mr. Shami has conflicting loyalties one to his cabinet and another to a foreign head of state.  Mr. Shami, just as any other honourable person in a free and democratic society, is entitled to his own personal views but has no right to substitute his views for those of his employer. If, for any reason, Mr. Shami does not agree with the official position of the Lebanese government then he could tender his resignation and leave the cabinet.

This cabinet that has barely been formed has already encountered some major internal conflicts regarding economic policy in addition to foreign policy objectives and internal administrative issues. And this is just the beginning; the Lebanese public can expect more conflict and internal disagreements within the cabinet itself. How can that not be the case when one side wishes to play two conflicting roles?  Hezbollah wishes to participate in the cabinet and yet oppose it, be considered a Lebanese political party but yet boast of its allegiance to Iran, uphold international law but yet disrespect it, pretend to be engaged in dialogue when it rejects categorically anything that will affect its interests.

When would we learn that conflicting ideas and different beliefs are to be welcomed and even encouraged in the legislative organs of government. The Executive on the other hand is there to deliver policies that will further the public good, the delivery of which depends on transparency and homogeneity of ideas.

Mr. Prime Minister, fire your Foreign Minister and restore integrity to the process.