Italian PM Silvio Berlusconi has been released from the hospital, four days after he was attacked at a Milan rally by a man wielding a statuette.

Sunday’s attack left Mr. Berlusconi with a broken nose and some chipped teeth. Doctors had planned to release the 73-year-old leader from the hospital Wednesday, but kept him under observation for an extra day after he experienced additional pain and had trouble eating. Source: VOA 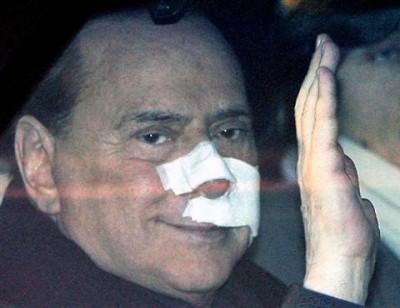 Italian Premier Silvio Berlusconi waves from his car as he arrives at his home in Arcore, Italy, 17 Dec 2009