Houston elects a lesbian as a mayor

Houston voters chose Annise Parker, who highlighted her sexual orientation in her victory speech, to replace Bill White as the next mayor of the fourth-largest U.S. city by population whose deficit was a campaign issue. This is the largest city ever to have a gay mayor

Parker who won 53.6 percent of ballots to 46.4 percent for Gene Locke told supporters last night before introducing “the person who has shared my life for more than 19 years:” “This election has changed the world for the lesbian, gay and transgendered community, just as it is about transforming the lives of all Houstonians for the better. Source: Bloomberg 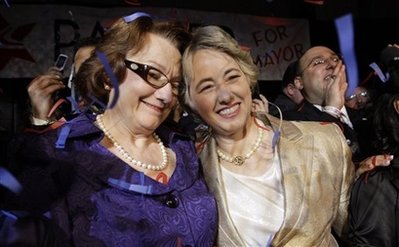