A Nobel winner who went wrong on rights

by yalibnan
675
In accepting his Nobel Peace Prize in Oslo on Thursday, President Obama talked about the quiet dignity of human rights reformers such as Burma's Aung San Suu Kyi
Share: 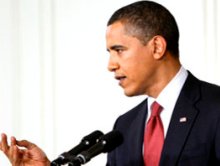 In accepting his Nobel Peace Prize in Oslo on Thursday, President Obama talked about the quiet dignity of human rights reformers such as Burma’s Aung San Suu Kyi, the bravery of Zimbabwean voters who “cast their ballots in the face of beatings” and the need to bear witness to “the hundreds of thousands who have marched silently through the streets of Iran.” Earlier in the week, thousands of Iranians did just that, gathering at university campuses in the most substantial demonstrations in the country since the summer, when hundreds of thousands protested Mahmoud Ahmadinejad’s disputed presidential election.

But back in June, even as much of the world cheered the Iranian protesters, Obama seemed reluctant to weigh in. “It is not productive, given the history of U.S.-Iranian relations, to be seen as meddling,” he said at the time. The White House may have feared that public support from Obama would allow the regime to paint the demonstrators as American stooges or might undermine U.S. efforts on Tehran’s nuclear program. Such fears seemed to paralyze the administration.

The irony of Obama’s Nobel Prize is not that he accepted it while waging two wars. After all, as Obama said in Oslo: “One of these wars is winding down. The other is a conflict that America did not seek.” The stranger thing is that, from China to Sudan, from Burma to Iran, a president lauded for his commitment to peace has dialed down a U.S. commitment to human rights, one that persisted through both Republican and Democratic administrations dating back at least to Jimmy Carter. And so far, he has little to show for it.

The reasons for this shift are complicated. After a number of conversations with current Obama advisers and former White House officials who spoke on the condition of anonymity, I’ve concluded that the president’s reasons for demoting human rights may have been well intentioned — even if the strategy isn’t working out as he planned.

For one thing, Obama clearly wants to distinguish himself from George W. Bush, who badly tainted the human rights agenda by linking it to the war in Iraq and by adopting an overly moralistic, evangelical tone about democracy. According to administration officials, this desire may have led Obama, early on, to be reticent about forcefully advocating democracy abroad, even as he boosted funding for democracy-promotion programs. But they believe the administration has reversed course, and they say the president is now talking more aggressively about democracy and human rights.

Some officials believe negotiating about human rights behind the scenes works better than bullying in public, since it permits nasty regimes to save face while, at least theoretically, allowing them to quietly make concessions. And some of the administration’s top human rights advocates came into office focused, not unnecessarily, on cleaning up America’s own abuses, from Guantanamo Bay to our rendition program — believing that human rights advocacy starts with setting a better example at home.

In other cases, Obama seems to have decided that winning support on challenges such as nuclear proliferation and climate change means treading quietly around human rights. With China, the president may also be hesitant to risk alienating our $800 billion banker. Finally, the president seems to believe that, no matter how brutal a government he is dealing with, he can find common cause.

Yet there is little evidence that his strategy will succeed. Obama may have toned down U.S. rhetoric, but who’s to say whether this will propel Iran and North Korea to halt their nuclear programs, or whether China will prove to be an effective partner on climate change. “The harder-to-fathom thing for me is why they think that cutting off support — rhetorical or material — to democrats and dissidents in repressive societies will gain the U.S. anything on the other agendas,” said Tom Melia, deputy executive director of Freedom House, a global democracy watchdog.

On occasion, the administration has diminished the focus on democracy at some basic institutional levels. Though the Bush administration established a deputy national security adviser for global democracy strategy, Obama’s National Security Council structure has explicitly downgraded the role of democracy specialists. And some parts of the government seem to be backing away from even the word “democracy.” “The USAID Mission in Amman called in all its implementers (grantees and contractors alike) to announce, among other things, that the Democracy and Governance portfolio (and the titles of people in the Mission) would no longer be ‘democracy & governance,’ ” Melia wrote in an e-mail. The United States Agency for International Development did not respond to a request for a comment.

These subtle signals have emerged even from the highest levels of the government: In testimony before the Senate Foreign Relations Committee this year, Secretary of State Hillary Rodham Clinton highlighted “three Ds” that would allow the United States “to exercise global leadership effectively”: defense, development and diplomacy. Democracy apparently did not make the cut.

The extent of the administration’s shift is also visible on the ground — even if the payoffs aren’t. In Egypt, a critical arena for democratization efforts, the United States has cut funding to independent civil society groups that promote democracy and is instead working more closely with government-linked nonprofits, according to several human rights activists who closely follow Egypt. “The administration doesn’t want to antagonize Egypt, a major Middle East ally, now that they might need Egypt’s help if there is going to be action against Iran,” said David Schenker of the Washington Institute for Near East Policy, who previously worked on Middle East issues in the Bush administration.

In Sudan, a country whose leader is under indictment by the International Criminal Court for crimes against humanity, U.S. policy now involves closer dealings than in recent years, and the administration’s special envoy to the region, Maj. Gen. Scott Gration, has deemphasized human rights abuses there. In September, he told The Washington Post that the United States should be “giving out cookies” to Khartoum, offering inducements for good behavior rather than punishment for bad — as if a regime accused of genocide were a misbehaving child.

Obama has changed the U.S. approach toward Burma, too. For more than a decade, Washington emphasized the use of sanctions, visa bans and other tools to isolate the Burmese junta, which is accused of overseeing forced labor, mass rape campaigns and other abuses. But the Obama administration has called for direct dialogue with the junta. And although the assistant secretary of state for East Asia and the Pacific, Kurt Campbell, has noted in congressional testimony that the administration maintains sanctions and is not writing the regime a blank check, it’s not clear exactly what further bad deeds the junta would have to commit to warrant a more severe reprimand.

Of course, the administration’s approach toward China has attracted the most notice. On his recent trip there, Obama was conspicuously silent about human rights in his public statements. At a town hall forum in Shanghai, he responded to a question about the Internet by saying, “I’m a strong supporter of noncensorship” — a strangely twisted phrase from a normally masterful communicator.

Later, in a joint news conference with Chinese President Hu Jintao (in which the two men took no questions from journalists), Obama said that he “welcomes China’s efforts in playing a greater role on the world stage,” but he did not criticize Beijing’s human rights record or mention its recent crackdown on Uighurs in Xinjiang. “We were told that the administration privately brought up Uighur issues, but that’s it,” said Omar Kanat, vice president of the World Uighur Congress, an activist group.

And in October, Obama’s administration became the first since 1991 not to meet with the Dalai Lama, even privately, when the Tibetan leader was in Washington. According to Kanat, the administration has also refused any high-level meetings with Rabeeya Kadeer, the most prominent Uighur dissident and a woman welcomed to the White House by Bush. “We’ve asked for meetings with senior people at the NSC, State, but they always just say they are too busy,” Kanat said.

“Advancing human rights and promoting democratic principles are key tenets of this Administration’s foreign policy,” said the National Security Council’s spokesman, Mike Hammer, in an e-mail. “The Obama Administration will meet with dissidents any time those meetings can serve to advance a just cause. The President spoke in Shanghai to an on-line audience of millions of Chinese about human rights and democratic freedoms as universal values. The President has been interviewed by a Cuban dissident blogger as well as the progressive Chinese Southern Weekly, and he will meet with the Dalai Lama.”

On matters of democracy and human rights, past presidents have wielded the bully pulpit to impressive effect, sometimes winning the release of high-profile dissidents. After Bush highlighted the case of Ayman Nour, the most prominent Egyptian dissident, in early 2005, Hosni Mubarak’s government released him from jail — but when attention faded, the regime locked him up again.

Conversely, Obama’s approach to Sudan may be encouraging the regime to use even tougher tactics in war-torn southern regions of the country. According to Michael Green, an NSC senior director for Asian affairs under Bush, “Authoritarian states take what leaders say more seriously than what bureaucrats say.” In other words, when the president does not make human rights a priority, it becomes easier for Beijing or Khartoum to ignore requests by lower-level American officials.

For all Obama’s compromises, the choice between human rights and other priorities may be a false one. Obama may not need to pick between criticizing regimes like those in China and Iran and working with those governments on other challenges. “You can see the Dalai Lama and rhetorically push on human rights and still have the other elements of the relationship with China,” said Sophie Richardson of Human Rights Watch.

Obama’s speech in Oslo reminded us why the Nobel committee decided to honor him with the peace prize: This was Obama at the height of his oratorical powers, speaking of war and peace and, yes, human rights, and calling upon mankind to “reach for the world that ought to be.” But the committee didn’t set out to merely applaud Obama’s great rhetoric; it bestowed this honor on him as an aspirational prize, one that would inspire him to even greater actions.

“The promotion of human rights cannot be about exhortation alone,” Obama said in his speech. “. . . We must try as best we can to balance isolation and engagement, pressure and incentives, so that human rights and dignity are advanced over time.”

Let’s hope he follows through.

*Joshua Kurlantzick is a fellow at the Council on Foreign Relations.