by yalibnan
4298
Speaker Nabih Berri resumed part VI of the parliamentary session at around 6:00pm to debate the Ministerial Statement and grant the vote of confidence to the cabinet
Share: 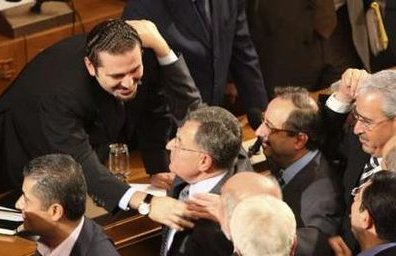 Speaker Nabih Berri resumed part VI of the parliamentary session at around 6:00pm to debate the Ministerial Statement and grant the vote of confidence to the cabinet

After consulting with PM Saad Hariri during this morning’s session, Speaker Nabih Berri said: “The night will extend till its end,” signaling the session would remain open till MPs finish their debates and vote on confidence in government.

Baath MP Assem Qanso started the debate by saying :”Israel cannot do anything against Lebanon in the presence of the resistance. International resolutions did not provide any result and the resistance is what liberated Lebanon.”

“The Resistance gave Lebanon its sovereignty, so why place it within the army? “he said

Commenting on the relations with Syria he said : I was receiving the Syrian army in 1975 with former president Amin Gemayel in Bikfaya with roses. Gemayel visited Syria 11 times, eight of which I was with him, and now the Syrian presence in Lebanon is considered an occupation.

Marada MP Estephan Doueihi addressed Prime Minister Saad Hariri by saying , “I would like to stress that the Ministerial Statement is “remarkable” in its economic and social sections. I hope that your cabinet will live up to its promises.”

In reference to the resistance he said : I, the Maronite Christian Lebanese Arab, grandson of Patriarch Estefan Doueihy, declare my pride to be a part of our people’s resistance in the South. Can one renounce what guarantees his rights?”

Commenting on relations with Syria he said “the special relations between Lebanon and Syria are a vital necessity for geographical and political reasons in addition to the historic and national identity . He stressed that this special relationship requires openness, cooperation and should take into consideration the mistakes of the past. ” He dded: There should be a mechanism to address all issues with Syria, such as the missing Lebanese detainees in Syrian prisons , delineating the international borders between Lebanon and Syria and treaties between both countries.

Zahle MP Nicolas Fattoush attacked PM Hariri and March 14 by saying : I had asked you whether you object on designating me as minister and your answer was that you have allies whom you can’t abandon, but you have abandoned me. He added “Zahle deserves the “eyes” of the majority, but instead of giving it their eyes, they turned their “glass eye” toward it. Zahle contributed to the March 14 alliance achievements; the March 14 leaders are taking away the city’s dream.” Fattoush said he will deny the vote confidence to the cabinet because he can’t imagine any sane person or official who is pleased with this government.

Fattoush was interrupted by his colleagues MPs Serge Toursarkissian and Ahmed Fatfat who addressed Fattoush by saying “all of this for a (ministerial) seat.”

After Fattoush’s statement, MP Boutros Harb asked Speaker Nabih Berri to delete “insults” against Hariri and March 14 from the parliamentary session minutes. Berri answered by reassuring Harb that what was considered as insulting was already deleted.

DL MP Anwar al-Khalil: There is a golden chance for the Lebanese through this government that consists of the majority of the political factions. We commend its commitment, as spelled out in the Ministerial Statement, to the Taef Agreement and constitution. We commend the cabinet’s position on liberating the land with the army, Resistance and people and on improving the Lebanese-Syrian relations and relations with the Arabs as well as its commitment to administrative decentralization.

He criticized the Syrian warrants against Lebanese officials

Hezbollah’s Loyalty to the Resistance” bloc chief MP Mohammad Raad, said that he is hopeful that granting the vote of confidence will open a new page in responding to the urgent need of building a capable and strong state and in preserving Lebanon’s strength .”

In reference to abolition of political sectarianism he said , “as long as our political system is still based on sectarianism , the solution remains the application of consensual democracy.”

Siniora reminded his colleagues that not long time ago ” we were fighting in the streets”, and added but ” today we are debating our difference in a democratic and civilized manner here inside the parliament and that is how it should be ” Siniora said ” lets hope this will be the beginning of a new stage of stability and calm and that should contribute to the prosperity of our nation”

At the end of the debate the Lebanon’s Prime Minister Saad Hariri and his 30-member Government won the Parliament’s vote of confidence with 122 votes out of 128. There was one vote against , one declined to vote and 4 MPs were absent