Suleiman presented Siniora with the Lebanese Order of Merit

President Michel Suleiman presented former Prime Minister Fouad Siniora the Lebanese Order of Merit the grade of Grand Cordon which is the highest award in Lebanon , at the Baabda presidential Palace on Friday

Siniora held the position of prime minister from 19 July 2005 to May 25, 2008 the date of the election of Suleiman as the new President of Lebanon; he was renominated to the post on 28 May 2008 and held the post as Acting President between those dates. He stepped down on 9 November 2009 in favor of Saad Hariri, the late Rafiq Hariri’s son. He currently serves as a member of Parliament from Saida. 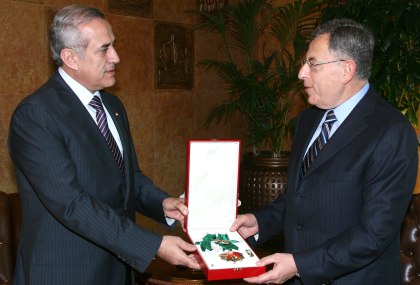