by Ghassan Karam
376
By Ghassan Karam Those who persist in critisizing Speaker Berri and President Suleiman for their plan to implement the Taef accords ought to be reminded of the saying:
Share: 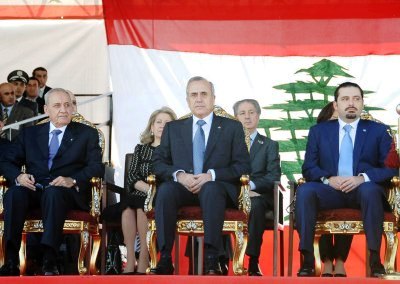 The well orchestrated attacks on the Berri-Suleiman plan can best be described as disingenuous, close minded and even bigoted. Political confessionalism is a misguided idea that has been gnawing at the Lebanese body politic ever since the establishment of the state 66 years ago. This idea of using the personal attribute of religion as the single factor for preventing a citizen from seeking a public office and many other civil service jobs is discriminatory, inefficient, harmful and egregious. One can even blame this single idea for most of the domestic tragedies that have consumed Lebanon in 1958, the 15 year civil war in addition to all the other social ills and inequities.

Speaker Berri ought to be commended for agreeing to spearhead the call by President Suleiman to take steps in order to implement the Taef accords that have stopped the Lebanese hemorrhaging over 15 years ago by demanding the creation of a bi cameral parliament and the total abolishing of political sectarianism all across the political sphere.   Mr. Berris’ call to establish a commission whose only charge is to study and recommend steps to phase out this most destructive of all practices in the Lebanese political system must be seen in its true historical context. It is simply a call to do what all the Lebanese parties have agreed to do 15 years ago but have always found an excuse to carry on business as usual.

Unfortunately it is these same procrastinators who have risen to challenge Speaker Berri for daring to remind them of their duties and their commitments. Obviously one should not expect those that have benefited from an arrangement to go ahead and cheer on its demise but it is important to remember that when such institutions, organizations and individuals act as obstructionists and obfuscators they are doing so for very selfish reasons. Sure they would try to rationalize their demagoguery as if they are driven by love of country when in effect their only intention all throughout the decades has been preserving their preferred status.  The logic and irrationality used by Patriarch Sfeir in order to prevent this hugely important and crucial step from becoming realized boggles the mind. How can we explain to our children that 35-40% of the population is entitled to 50% of the parliamentary seats or that a bright young educated Shiite woman cannot become a prime minister for no fault of her own besides the fact that she was born on the wrong side of the track so to speak.

It should not be too difficult to understand that any form of discrimination, racial, ethnic or religious is just as bad as any other form of discrimination based on gender, sexual preferences or the colour of ones eyes. Patriarch Sfeir makes an excellent point when he says that it is important to eliminate sectarianism from the inner soul of individuals. That would be a tremendous accomplishment but to use the need to create a perfect state made of saints sounds as an excuse to derail badly needed reform efforts is unconscionable.  Society has a duty to set laws and regulations that would enhance the common good and citizens have the right to disagree with such laws but must obey them while they are in effect. Anti discrimination laws do not mean by any stretch that we have eliminated bigotry but it means that it would be illegal to act upon it.

President Suleiman and Speaker Berri need all our support in order to proceed with this project upon whose completion the future of the state rests.  (On many issues besides this initiative the writer has been and remains a vocal critic of both Mr. Berri and Mr. Suleiman).