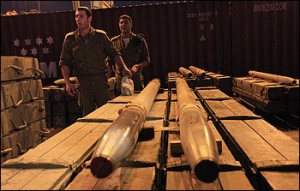 SHARJAH, UNITED ARAB EMIRATES – The warning came almost too late. The freighter ANL Australia had already fired its engines for a 70-mile dash to Iran when customs agents here were alerted to a possible hidden cache of weapons on board.

Inspectors from the United Arab Emirates quickly swarmed the ship and uncovered a truck-size container packed with small arms made in North Korea. Concealed deeper in the ship was the real find: hundreds of crates containing military hardware and a grayish, foul-smelling powder, explosive components for thousands of short-range rockets.

The nature of the cargo, seized in July and described for the first time in interviews with officials and analysts in the UAE and Washington, has raised fears that Iran is ramping up efforts to arm itself and anti-Israel militias in the Middle East. Israeli officials have warned that they may use force to prevent Iran from developing nuclear weapons.

The freighter seized in this port enclave was one of five vessels caught this year carrying large, secret caches of weapons apparently intended for the Lebanese group Hezbollah, the Palestinian organization Hamas or the Quds Force, a wing of the Iranian Revolutionary Guard Corps that supports insurgents in Iraq, according to U.S. and U.N. officials and intelligence analysts. In three cases, the contraband included North Korean- or Chinese-made components for rockets such as the 122mm Grad, which has a range of up to 25 miles and which Hamas and Hezbollah have fired into Israel.

Among the weapons components discovered aboard the ANL Australia were 2,030 detonators for 122mm rockets, as well as electric circuitry and a large quantity of solid-fuel propellant, according to an account given by UAE and U.N. Security Council officials. The materials were bought from North Korea and shipped halfway around the globe in sealed containers, labeled as oil-drilling supplies, that passed through a succession of freighters and ports.

An Israeli raid last month on a ship in the eastern Mediterranean reportedly netted hundreds more 122mm rockets. Israeli officials said the freighter was bound for Syria and was carrying 500 tons of armaments intended for Hezbollah. Similar caches were discovered this year at a port in Cyprus and aboard Russian and German cargo ships searched by U.S. Navy teams.

A U.S. intelligence official familiar with the UAE episode acknowledged that U.S. spies “played a key role” in tracking the shipment, but he declined to elaborate.

The surge in smuggling is a direct challenge to the Security Council, which is convening a special panel this month to review Iranian violations of U.N. resolutions banning such weapons shipments. U.N. and U.S. officials say sanctions adopted by the world body against Iran appear to be having little effect, and Iranian leaders continue to defend their right to aid groups they call “fighters in the path of God.”

“We are proud to defend Hamas and Hezbollah,” Ali Larijani, Iran’s parliament speaker, said at a news conference in May. “We are not trying to hide it

The route chosen by North Korea to deliver the rocket components eventually seized by the UAE was hard to track. According to shipping records, the 10 large cargo containers left the North Korean port of Nampo on May 30 on a North Korean vessel, and two days later they were transferred to a Chinese ship in the port city of Dalian, in northern China.

From there, the containers were ferried to Shanghai, where on June 13 they were moved to a third ship, the ANL Australia, a Bahamian-flagged freighter owned by a French consortium. Spokesmen for the freighter’s owner and operator say they received sealed cargo containers along with manifests that listed the contents as oil-well equipment.

By mid-June, the cargo had left Shanghai on the ANL Australia, which followed a meandering course through East and Southeast Asia, pausing in mid-July in Dubai, one of the world’s largest seaports. Then it left on the final leg of its journey, to Shahid Rajai, on the shores of Iran’s Strait of Hormuz.

Because of international sanctions, Iran and North Korea have been forced to buy and sell military-related technology through clandestine means. Iran, in particular, has favored a strategy of redundant purchases from multiple vendors, assuming that some shipments will be discovered and stopped, said David Albright, a former U.N. nuclear inspector who is president of the Institute for Science and International Security, a nonprofit research group in Washington. Using such schemes, and employing a network of front companies, Iran has managed to obtain key technology and equipment for advanced missiles as well as a sophisticated nuclear program.

“These networks have spread like the Internet, and as they get bigger, they get even harder to destroy,” Albright said. “They use fronts to obtain all kinds of technology from major suppliers, including Europe, Russia, China and the United States.”

For years, Dubai served as a convenient hub for Iran’s illicit procurement network. But two years ago, the UAE began what U.S. officials acknowledge is a serious crackdown on Iranian trafficking in military technology. Its government has enacted tough export controls, restricted the number of business visas to Iranians and closed numerous suspected front companies, according to UAE officials as well as Western intelligence officers and independent analysts.

But government officials and analysts acknowledged that the UAE’s capacity to shut down trafficking is still being developed, and much of the illegal trade in the region consists of cash-and-carry transactions that are harder to detect and control.

The crackdown also is not without costs. The UAE, which conducts nearly $15 billion in annual trade with Iran, has received numerous complaints over what Tehran calls unwarranted interference by UAE regulators.

Yet, UAE officials insist that they are acting in their own interest, and not in response to pressure from the United States or anyone else.

“No one can tell us that we can’t have legitimate trade,” one UAE official said. “But we were coming into a crunch, where we had to make a choice for the sake of national security: We either have to do a better job of stopping this trafficking or prepare to live with a nuclear Iran.”

UAE officials faced that dilemma July 22 when alerted to possible contraband in the ship bound for Iran, the official said.

After the containers holding the arms and rocket materials were removed, the ANL Australia was released to continue its journey. The propellant was left on UAE soil, where it remained as recently as this week. The U.N. sanctions committee has filed a formal query with North Korea, but there has been no response.

UAE officials say they are awaiting the arrival of U.N. witnesses to begin the process of destroying the fuel.