Would The Wall Ever Fall In The Arab World? 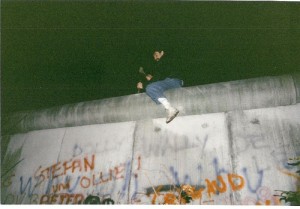 The whole world has been celebrating one of the most momentous events of the later half of the tweentieth century, the fall of the Berlin Wall in 1989. What a triumph for the human spirit, for democracy, individual freedom, human dignity and personal freedom. The events that followed the collapse of that symbol of oppression were as exhilarating as the event itself. The fall of the wall set in motion a liberation tsunami that washed over all of Eastern Europe, parts of the Soviet Union and Central Asia.

It was only Africa and MENA (Middle East and North Africa) that have been “spared” the move towards liberal democracy. Not even Russia was able to resist the tide to democratize and introduce some reforms, albeit not as successful as in most of the other countries. Yet the gulag has been exposed and discredited and the hope is that it will never be able to make a come back.

Despite all of this the one region of the world that seems to be immune to the trend to liberalize and democratize seems to be the Arab World. In a sense the region that has resisted rather successfully until now the forces of liberation and freedom includes the whole of MENA with the possible exception of Turkey.

Many are by now familiar with the Arab Human Development Reports commissioned by UNDP but authored by independent Arab thinkers. The results of these studies have been anything but flattering.

The Arab countries as a group are home to over 300 million people and yet the total number of translated books every year is less than the books translated by Greece. It is not only education that is lacking but so is science and development. The Arab countries, as a group, managed to register in the US less than 400 patents when South Korea had registered in the same time period over 15,000 and Israel over 7000. A recent global happening illustrates the “backwardness” of the Arab masses best. When what promises to be one of the greatest discoveries, that of ARDI, a 4.5 million year old skeleton was announced the few mentions of this phenomenal discovery in the Arab press were devoted to the wrong interpretation that Darwin was wrong. They had missed the fact that ARDI is one of the most impressive pieces of solid evidence about the truth behind the Darwinian theory of evolution. Furthermore a survey conducted in Egypt revealed that less than 30 % of the public had even heard of the name Darwin. Such examples abound in every field. The fact of the matter is that the Arab region lags behind the rest of the world in practically every single area and field.

But many individuals of Arabic decent have succeeded in practically all fields and in all sorts of countries. Obviously this suggests that the fault is not that of the individual but it is of the oppressive, dictatorial backward exploitative political environment in each and every one of the 21 countries including the 22nd Occupied Palestinian Territory. A cursory look at the map of MENA from the Atlantic Ocean to the Persian Gulf reveals countries that are ruled by absolute monarchs, Emirs, Sultans and dictators. Muamar Kaddafi has been in power for 40 years and is preparing the ground for his son, Egypt is about to become Mubarak land, Syria was inherited by a young optometrist, Yemen has had the same president for 30 years , Tunisia just reelected its president for the sixth term with an 87% plurality and the beat goes on. Lebanon is the only country that has a claim to democratic institutions but in reality they are just as hollow and rotten as those of its neighbours. Political feudalism masquerading as democracy.

It is obvious that in a wired up world and one with more travel and interactions than ever before the role of the authoritarian regimes is becoming more difficult. But the size of the Mukhabarat keeps on growing, and indiscriminate fear continues to spread in an attempt to thwart the inevitable move to personal freedom and democracy. An Arab Wall shall fall and when it does it shall sweep all throughout Mena to topple these regimes. That we can count on, that is how history unfolds. I just hope and pray that when the time comes we are mature and smart enough to have a velvet revolution.