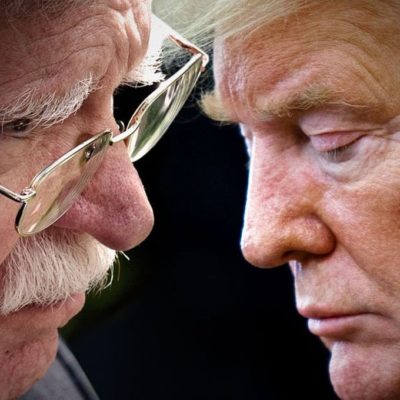 House investigators are asking former national security adviser John Bolton to testify in their impeachment inquiry, deepening their reach into the White House as the probe accelerates toward a potential vote to remove the president.

Democratic lawmakers want to hear next week from Bolton, the hawkish former adviser who openly sparred over the administration’s approach to Ukraine — in particular, President Donald Trump’s reliance on his personal attorney Rudy Giuliani for a back-channel operation. Bolton once derided Giuliani’s work as a “drug deal” and said he wanted no part of it, according to previous testimony.

Bolton’s attorney, Charles Cooper, said Wednesday evening that his client would not appear without a subpoena.

The Democrats are also calling John Eisenberg, the lawyer for the NSC who fielded an Army officer’s concerns over Trump’s phone call with the Ukraine president, and Michael Ellis, another security council official, according to a person familiar with the invitation and granted anonymity to discuss it.

The rush of possible new witnesses comes as the House prepares to take its first official vote Thursday on the process ahead. That includes public hearings in a matter of weeks and the possibility of drafting articles of impeachment against the president.

The White House has urged officials not to testify in the impeachment proceedings, and it’s not guaranteed that those called will appear for depositions, even if they receive subpoenas as previous witnesses have.

Bolton’s former deputy, Charles Kupperman, has filed a lawsuit in federal court asking a judge to resolve the question of whether he can be forced to testify since he was a close and frequent adviser to the president. Any ruling in that case could presumably have an impact on whether Bolton will testify. A status conference in that case was scheduled for Thursday afternoon.

Trump and his Republican allies on Capitol Hill say the entire impeachment inquiry is illegitimate and are unpersuaded by the House resolution formally setting out next steps.

Senate Majority Leader Mitch McConnell said the format for the impeachment probe denies Trump the “most basic rights of due process.”

Now in its second month, the investigation is focused on Trump’s July phone call with Ukraine when he asked President Volodymyr Zelenskiy to investigate Democrats and a potential 2020 political rival, Joe Biden, as the White House was withholding military aid Ukraine relies on for its defenses. Democrats contend Trump was proposing a quid-pro-quo arrangement.

On Thursday, the investigators are to hear from Tim Morrison, a former top GOP aide on Capitol Hill, who served at Trump’s National Security Council and was among those likely monitoring the president’s call with Ukraine.

Late Wednesday, it was disclosed that Morrison was resigning his White House position. He has been a central figure in other testimony about Trump’s dealing with Ukraine.

Earlier in the day, the Democratic and Republican House lawmakers heard fresh testimony about the Trump administration’s unusual back channels to Ukraine.

Foreign Service officer Christopher Anderson testified that Bolton cautioned him that Giuliani “was a key voice with the president on Ukraine” and could complicate U.S. goals for the country.

Another Foreign Service officer, Catherine Croft, said that during her time at Trump’s National Security Council, she received “multiple” phone calls from lobbyist Robert Livingston — a former top Republican lawmaker once in line to become House speaker — telling her the U.S. ambassador to Ukraine, Marie Yovanovitch, should be fired.

“It was not clear to me at the time — or now — at whose direction or at whose expense Mr. Livingston was seeking the removal of Ambassador Yovanovitch,” she said in prepared remarks obtained by The Associated Press.

Livingston characterized Yovanovitch as an ”‘Obama holdover’ and associated with George Soros,” she said, referring to the American financier who is often the subject of conservative criticism in the U.S. and Europe.

Most Democrats are expected to support the formal impeachment investigation resolution Thursday, even if they don’t back impeachment itself, saying they are in favor of opening the process with more formal procedures.

Public hearings are expected to begin in mid-November, a matter of weeks. Democrats are eager to hear from some top witnesses who have already provided compelling testimony behind closed doors, including diplomat William Taylor, a top ambassador in Ukraine, and Alexander Vindman, the Army officer who testified Tuesday that he twice reported to superiors, including Eisenberg, his concerns about Trump’s actions toward Ukraine.

Vindman is willing to testify publicly, according to a person familiar with the situation and granted anonymity Wednesday to discuss it.

At Trump’s hotel in Washington, during a fundraiser for House Republicans and lengthy dinner afterward with GOP leaders, the president indicated he was prepared for the fight ahead, said those familiar with the private gatherings Tuesday night.

Both career diplomats testifying Wednesday had served as top aides to the former U.S. special envoy to Ukraine, Kurt Volker, who was the first to testify in the impeachment inquiry and whose cache of text messages provided key insight into Trump’s demands on the new Ukraine president.

Croft, who testified for nearly five hours, described being told at an administration meeting that security funds for Ukraine were being put on hold “at the direction of the president,” corroborating other accounts that have been provided to investigators.

In his opening statement, Anderson traced his unease with developments that he felt threatened to set back relations between the U.S. and Ukraine.

Both witnesses were instructed by the administration to not testify but appeared in response to subpoenas from the House, according to a statement from their attorney Mark MacDougall.

The lawyer told lawmakers that neither of his clients is the whistleblower whose complaint triggered the impeachment inquiry and that he would object to any questions aimed at identifying that person.