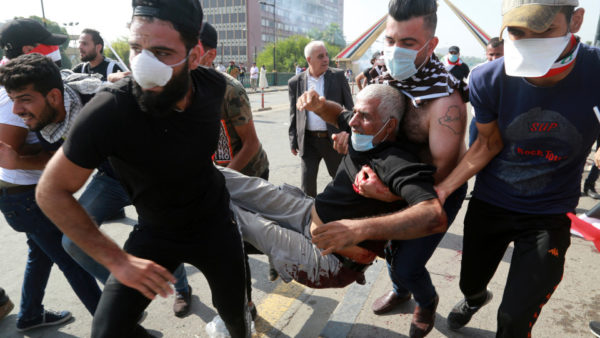 An injured protestor is rushed to a hospital during a demonstration in central Baghdad, Iraq, Friday, Oct. 25, 2019. Iraqi police fired live shots into the air as well as rubber bullets and dozens of tear gas canisters on Friday to disperse thousands of protesters on the streets of Baghdad, sending young demonstrators running for cover and enveloping a main bridge in the capital with thick white smoke. (AP Photo/Hadi Mizban)
Share:

At least 67 Iraqis were killed and hundreds wounded in two days of protests over the weekend, as demonstrators clashed with security forces and militia groups in a second wave of protests against Prime Minister Adel Abdul Mahdi’s government this month.

Seeking to contain the spiraling violence, on Saturday night Abdul Mahdi ordered members of the country’s elite Counter-Terrorism Service (CTS) onto the streets of the capital Baghdad and the southern city of Nasiriya.

They were told to “use all necessary measures” to end the protests, security sources told Reuters.

The two cities, where thousands had turned out for a second day of protests, saw the bulk of Saturday’s violence as protesters continued to vent their frustration at political elites they say have failed to improve their lives after years of conflict and economic hardship.

Four people were killed after being struck directly in the head by tear gas canisters fired by security forces in Baghdad, with dozens more wounded. Four others died in Nasiriya, when a group of protesters stormed the home of a local security official, police said. Guards opened fire after the protesters torched the building, police said.

Seven more people died in Hilla, most when members of the Iranian-backed Badr Organization militia group opened fire on protesters who had gathered near their office.

At least 52 people were killed around the country on Friday, and more than 2,000 more wounded.

The latest bloodshed was the second major bout of violence this month. Earlier in October, 157 people were killed and more than 6,000 wounded in other clashes between protesters and security forces.

The unrest has broken nearly two years of relative stability in Iraq, which from 2003 to 2017 endured a foreign occupation, civil war and an Islamic State (IS) insurgency.

It poses the biggest challenge to Abdul Mahdi since he took office just a year ago. Despite promising reforms and ordering a broad cabinet reshuffle, he has so far struggled to address the protesters’ discontent.

Adding more pressure, the parliamentary bloc linked to Shi’ite cleric Moqtada al-Sadr announced it was going into opposition on Saturday, a big blow to his premiership.

However, Abdul Mahdi’s decision to deploy CTS troops was likely to be met with broad support from the country’s political elite as well as praise from security forces who said they would not shy away from using force.

Earlier in the day, Iraq’s military and Ministry of Interior said that they planned to respond more firmly to protests on Saturday after Friday’s heavy death toll.

Political leaders also spoke out in support of the security forces’ actions over the weekend, while militia leaders signaled their support for a tough stance against protesters, and urged the premier not to back down.

The statements came after another long day of violent protests across the country. Although volleys of tear gas were lobbed indiscriminately at protesters on Saturday, many demonstrators expressed relief that security forces had not used live rounds this time.

In Baghdad protesters distributed masks and homemade remedies to protect themselves from the tear gas. Others handed out food and water.

As sirens wailed and tuk-tuks ferried bloodied protesters to hospitals, others expressed outrage at a political establishment so willing to resort to violence.

“Our protests are peaceful, we only have flags and water bottles, but they keep firing bombs at us, firing tear gas at us,” said 33-year-old demonstrator Silwan Ali. “What have we done to deserve this? What have we done? The young men who died, what did they do?” he said.

Most of those killed on Friday and Saturday were protesters in cities in the south, as demonstrators focused their anger on politicians and Iranian-backed Shi’ite militia groups.

Members of the powerful Asaib Ahl al-Haq (AAH) militia turned their guns on protesters in both Nasiriya and Amara on Friday, leaving scores dead. AAH also clashed with another powerful militia, one loyal to populist cleric Moqtada al-Sadr.

Despite a curfew and federal anti-riot forces dispatched from Baghdad, thousands gathered across cities in the south on Saturday, clashing again with militia groups.

Protesters continued to torch the offices of all major political parties, militia groups, and local government buildings. In Nasiriya, they set fire to the governor’s house.

“This is not a protest, this is a revolution,” said one protester who declined to give his name.

Parliament was set to meet on Saturday in an emergency session to discuss the protesters’ demands, but with many politicians keeping a low profile since the protests began it failed to reach a quorum and the session was canceled.

“The government has been stealing from us for 15 years. Saddam went and 1,000 Saddams have been hiding in the Green Zone,” a protester who declined to be named said on Saturday, referring to the former Iraqi dictator.