Lebanon protest: All of them means all of them 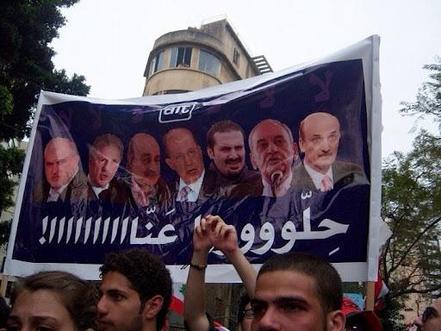 Lebanese protesters who have been gathering in growing numbers for five days are demanding the complete renewal of the political class, whose main figures haven’t changed in decades.

Since the 1989 Taef agreement that brought to an end the 15-year civil war and defined the rules of a sectarian-based power-sharing system, the same politicians, or their relatives, have called most of the shots.

They long seemed untouchable but their future is now in the balance, with protesters vowing they will not relent until Lebanon’s political barons are out of the picture.

Herewith a penpix of the country’s main political figures:

A Maronite Christian, he once championed opposition to the Syrian occupation of Lebanon and launched an ill-fated “war of liberation” in 1989.

Forced into French exile by Syria, he eventually returned in 2005, after the withdrawal of Syrian forces, and became president after a spectacular shift of alliances earned him the support of his erstwhile arch-foes.

Once a vocal critic of nepotism, he managed to secure a ministerial portfolio for his son-in-law Jebran Bassil and made him the leader of his party.

The 49-year-old Bassil, who is now foreign minister, is arguably the most reviled leader among the protesters, who have not spared him in often explicit slogans.

The 49-year-old prime minister and leader of the al-Mustaqbal Movement is the scion of an influential Sunni Muslim family.

His father Rafik, a billionaire who spearheaded Lebanon’s post-civil war reconstruction, was assassinated in 2005.

Saad Hariri has cast himself as a champion of economic reform held hostage by unwilling coalition partners but protesters have pilloried him all the same as a hypocrite and pure product of Lebanon’s hereditary politics.

His image was further tarnished last month when reports surfaced that he had sent $16 million dollars to a South African model, even as his family group’s employees were being laid off or worked unpaid.

Nabih Berri, 81, has been parliament speaker since 1992. He was reelected last year for a new four-year mandate. He is also the most senior political representative of Lebanon’s Shiite community.

He leads the AMAL movement, which had one of the main militias in Lebanon’s civil war. A former warlord, he has remained one of Syria’s main allies in Lebanon.

His critics accuse him of having abused his position to amass a colossal personal fortune and protesters in recent days bashed him and his wife Randa as some of the most egregious examples of Lebanon’s patronage system.

Since 1992, he has shared power in the Shiite community with the Hezbollah movement led by Hassan Nasrallah, who is a cleric and has never been a state official, though he wields enormous political and military power.

The heir of one of Lebanon’s oldest political dynasties, the 70-year-old Druze leader took over from his father Kamal, who was assassinated in 1977.

Also a former warlord, Jumblatt long headed the Progressive Socialist Party and is a towering figure in the Druze minority.

He was nicknamed “the cameleon” for his ability to shift alliances and navigate Lebanon’s ruthless political game.

Some protesters see Walid Jumblatt as a symbol of the feudal nature of Lebanese politics.

As head of the Druze community, he used to hold open hearings at his Mukhtara residence in his Chouf mountain fiefdom every weekend, though his son Taymour has now taken over these duties.

His PSP currently sits in government and Jumblat also “passed on” his parliament seat to his son Taymour last year.

Samir Geagea, 66, rose to prominence during the civil war when he took over the leadership of the Lebanese Forces militia.

He opposed Syria’s occupation of Lebanon and in 1994 became the first civil conflict warlord to be jailed. He was released 11 years later and returned to the political fray.

He was accused by another Christian leader, pro-Syrian Suleiman Franjieh, of complicity in the 1978 murder of his parents and sister, an allegation the LF have denied.

The Gemayel dynasty, another major Christian political clan, is represented by Sami Gemayel.

A lawmaker, he is the son of Amin Gemayel, who was president for six years during the war, and heads the Kataeb Party.

His cousin Nadim Gemayel, the son of Bashir Gemayel who had been president for less than a month when he was assassinated in 1982, is also an MP.