Protests grow in Lebanon as anger explodes at political elite 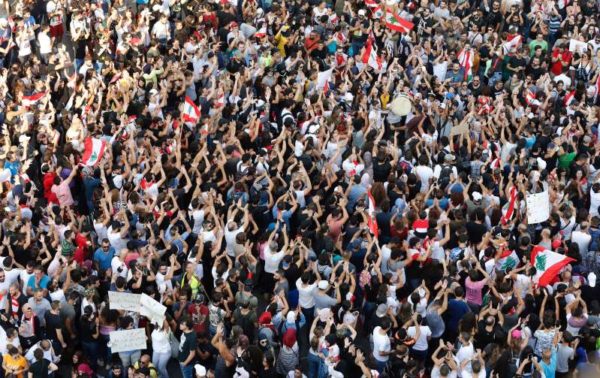 Tens of thousands of protesters filled the streets for a third day in Lebanon on Saturday, demanding the removal of a political elite they say has lined its pockets at the nation’s expense.

Flag-waving demonstrators converged once again on Beirut’s central business district, home to bank and government headquarters, where rioters clashed with police late into the night Friday. The protests first erupted Thursday night after the government said it might impose a fee on Whatsapp calls as part of broader efforts to shore up government revenues and avert an economic collapse

Highlighting the depth of anger with political elites, the demonstrations have cut across sectarian and party lines that normally dominate political action in Lebanon.

Unrest has spread to strongholds of political figures including parliamentary speaker Nabih Berri, an ally of Iranian-backed Hezbollah, whose loyalists scuffled with demonstrators on Saturday.

The protests have increased pressure on Prime Minister Saad al-Hariri, who has given his rivals in the coalition government until Monday to back an economic reform program that could help unlock some $11 billion in international aid pledges. He held a series of meetings Saturday with other political leaders to seek a way out of

It won’t be easy for one of the most indebted countries in the world, which needs to find fresh sources of funding as the foreign inflows on which it has traditionally relied have dried up. Persistent instability in Lebanon has shaken investor confidence and made it harder to revive an economy already struggling to absorb more than 1.5 million Syrian refugees who have fled the war next door.

The stakes are high for Lebanon, a tiny country that straddles the geopolitical fault-lines of the Middle East and has struggled to emerge from the shadow of a 15-year civil war that ended in 1990. With the economy slowing and living standards falling, anger has exploded at the former warlords who have presided over decades of cronyism, economic mismanagement and corruption.

Politicians have responded to demonstrators by asking for more time, but investors and donors are increasingly skeptical the government can carry out reforms, such as restructuring an ailing electricity sector, without destabilizing a fragile political system built on sectarian power-sharing.

A Sunni Muslim, Hariri has been traditionally backed by Saudi Arabia, but the kingdom has withheld support in recent years as the Iranian-backed Hezbollah militia’s political influence in the government has grown.

Hezbollah and its allies in government are reluctant to accept tax increases to spare their supporters further economic pain amid tightening U.S. sanctions on the group’s members and on its patron, Iran

If Hariri and his allies resign, Lebanon could end up with a government dominated by Hezbollah, making it even harder to attract investment from Gulf Arab countries or the West. If they stay, however, few observers see how they can overcome their differences.

Hezbollah chief Hassan Nasrallah said in a televised speech Saturday that the government should not quit but he would not back an economic plan that would see poorer Lebanese bear the brunt of reforms. In a veiled threat to Hariri and his allies, Nasrallah said there was no time to waste on new elections and coalition-forming and those who try to flee their responsibilities after years in power should be put on trial.

“A new government would be the same as the old one,” Nasrallah said. “Everyone must accept responsibility and take part in finding a solution.”

To contact the editors responsible for this story: Lin Noueihed at lnoueihed@bloomberg.net, Abbas Al Lawati