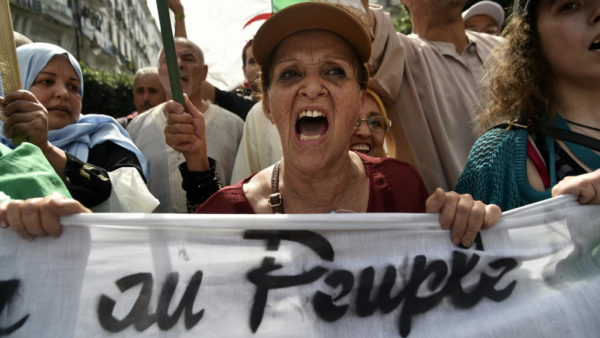 Ryad Kramdi, AFP | Algerian protesters take part in a demonstration against the country’s army chief in Algeria’s capital Algiers on September 20, 2019, as the police toughens its line ahead of December elections.
Share:

Thousands of pro-democracy protesters took to the streets of the capital on Friday, chanting defiantly in the face of a crackdown on the demonstration by the country’s powerful army chief.

For the 31st straight week, the protesters made their presence felt in Algiers though this time they faced new tactics to discourage the crowd. Roadblocks on major highways leading into the Algeriancapital had been put up to stop citizens with so-called “malicious” designs from taking part. That came on top of a series of arrests of protesters over the past week.

“Generals into the garbage cans,” crowds chanted. “Free the children of the people.”

It was not clear whether any protesters were detained.

Gaid Salah has emerged as the authority figure since longtime President Abdelaziz Bouteflika was ousted in April.

The army chief has long evoked plots against Algeria’s security, but his get-tough orders came days after a Dec. 12 date was set for presidential elections   just as he had demanded.

He claims protesters   who want elections on their own terms   are manipulated by others with “malicious” intent.

As in previous weeks, the protesters made clear their opposition to the general, and proudly proclaimed their defiance.

“Come look at us, Gaid Salah,” said a crowd at the gates of the university, referring to the large turnout.

Protesters want all traces of the Bouteflika regime, mired in corruption, to leave and open the way for a new era for the gas-rich North African nation.

Numerous arrests have been made recently, including three figures emblematic of the protest movement. At least one of them is charged with “distributing tracts that undermine national unity.”

Gaid Salah is also thought to be the main impetus behind an anti-corruption campaign which has seen top industrialists and political leaders sent to jail   including key members of Bouteflika’s inner circle. His younger brother and two former intelligence chiefs go on trial on Monday for plotting against the state.