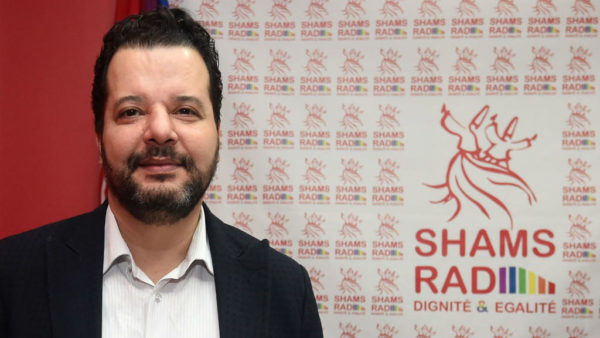 For the first time, an openly gay candidate has thrown his hat in the ring for a presidential election in Tunisia. Mounir Baatour heads the country’s main LGBT rights group. His bid marks a test for post-revolutionary Tunisia’s fledgling democracy.

Baatour, a lawyer at Tunisia’s highest court and the president of Shams, a group seeking the decriminalisation of homosexuality in the country, has officially applied for a spot on the ballot ahead of the September 15 presidential election. His bid for office is a first not only for the North African nation that set in motion 2011’s Arab Spring uprisings, but for the Arab world writ large.

The 48-year-old, who is also president of the Liberal Party, has campaigned on themes including “real equality between women and men”, “defending minorities” and “recognising the rights of people of the Amazigh” ethnic group and LGBT rights.

“After so many years fighting for minority rights, I understood that nobody could do the work better than me,” Baatour told the Belga press agency in June.

But Baatour has also made clear that his is all but a narrow one-issue bid.

“The fact that I’m gay doesn’t change anything. It’s a candidacy like all the others,” Baatour told Agence France-Presse. “I have an economic, social, cultural and educational programme for everything that affects Tunisians in their daily lives,” he added.

“Our platform seeks to democratise power by reinforcing the weight of parliament and giving more weight to local institutions,” the activist and aspiring candidate has posted to Facebook. Baatour is also stumping to create jobs and to “clean up an economy artificially inflated by and extremely dependent on foreign investment”.

‘Liberate Tunisia from the old parties’

In Tunisia, homosexuality is punishable by three years in prison. Baatour himself spent three months behind bars in 2013 for “sodomy” with a 17-year-old student, an accusation the lawyer has always denied. Shams, the advocacy group Baatour co-founded, has on several occasions seen its activities suspended.

“My goal is to liberate Tunisia from the old parties and the traditional way of governing that has brought Tunisia its troubles,” Baatour told the Rassef 22 website.

The progressive presidential hopeful has set the Islamist-inspired Ennahda party in his sites. He argues thatpersecution of homosexuals was less pervasive before 2011, the year Ennahda first joined a governing coalition in the wake of the Arab Spring uprising that toppled longtime leader Zine al-Abidine Ben Ali.

Convictions for same-sex relations in Tunisia rose by 60 percent to 127 in 2018, according to Shams. In the first quarter of this year, the organisation recorded more than 25 convictions.

Recognised abroad for his gay rights work – Baatour won France’s Idaho Prize for his efforts in 2018 – he had already assembled the 10,000 signatures needed to get his name on the presidential ballot a month ago.

The bid has, however, also elicited criticism. Baatour has weathered insults on social media and been accused of bringing “shame” on Tunisia. Some fellow Tunisian lawyers have called for him to be disbarred on the grounds that he “causes grave harm to the image of the bar”, the National Bar Council said on Twitter.

Meanwhile, a number of gay rights groups have sought to distance themselves from Baatour’s bid, posting a petition online claiming he “does not represent the LGBTIQ+ community or our movements in Tunisia”, although the initiative has so far gathered only two-thirds of its 500-signature target.

Baatour has also stood out in the Tunisian political landscape for his apparently conciliatory attitudes toward Israel.

“Two years ago, he came out in support of fully normalising relations with Israel, and said he would be happy to visit Israel the moment it became possible,” Israel’s Haaretz newspaper wrote last month, though noting that Baatour had “recently changed his tune somewhat” by conditioning this normalisation on Israel’s recognition of Palestinian rights and its compliance with the terms of a Tunisia-mediated peace agreement.

“It is hard to tell which position will hurt Baatour’s electoral chances more, his stance on gay rights or his support for normalisation with Israel”, the left-leaning daily concluded.

Tunisia’s election, initially slated for November, was rescheduled for September 15 in the wake of President Béji Caïd Essebsi’s death in July. Ninety-eight contenders officially submitted their bids by Friday’s deadline, with the election commission due to rule on August 31 which candidates meet the criteria to stand for the office.

The presidential campaign is scheduled to begin on September 2.