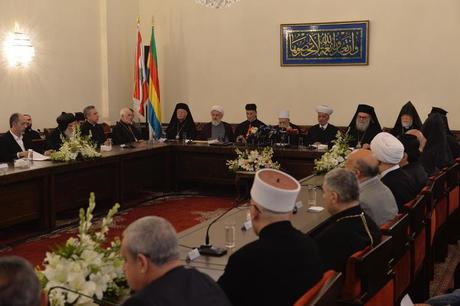 Lebanon’s top  religious and spiritual leaders  held a summit on Tuesday at the Druze Council headquarters in Beirut at the invitation of Druze spiritual leader Sheikh Naim Hassan.

“Our appeal is a call for responsibility and love. We appeal to the President of the Republic (Michel Aoun) to bring the Lebanese together under the framework of constants and to prevent any attempt to undermine the foundations of the entity based on pluralism and partnership.”

“I hope the summit becomes a periodic one, and we all pray for the nation’s salvation,” said Patriarch al-Rai.

For his part, Mufti Deryan said: “As spiritual leaders we have never differed on the basic fundamentals of the survival of this nation and its continuation, we have always been in contact to solve complex issues under the basic rules of national unity, coexistence and adherence to the constitution and Taef Accord.”

The summit comes after  the June 30  Qabr Shmoun, Mt  Lebanon incident      an area which  was one of the bloodiest theatres of the 1975-90 civil war.

Further complicating the picture, the incident has also drawn in President Michel Aoun, a Maronite Christian and the political movement led by his son-in-law, Foreign Minister Gebran Bassil.

Lebanon’s top spiritual leaders  said in a joint statement on Tuesday the incident had “led to the obstruction of government work that is a pressing necessity for political and security stability and economic revival”.