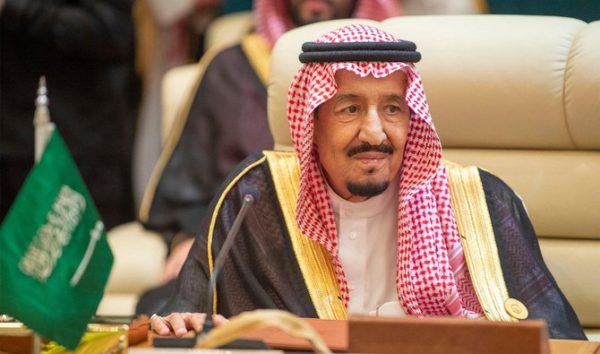 Saudi Arabia’s King Salman on Friday ratcheted up the rhetoric against arch-nemesis Iran, calling on Arab states to confront its “criminal” actions after attacks on oil installations sparked fears of a regional conflagration

The king’s remarks came at the start of two back-to-back emergency summits in the holy city of Mecca, which drew near-unanimous support for the Sunni kingdom from Gulf and Arab states — with the exception of Iraq.

The summits came a day after hawkish US National Security Advisor John Bolton said Iran was almost certainly behind this month’s sabotage of four ships, including two Saudi oil tankers, off the UAE coast. Tehran rejected the charge.

Saudi Arabia, a staunch US ally, also faces stepped-up drone attacks from Iran-aligned Huthi rebels, one of which resulted in the temporary shutdown of a major oil pipeline.

“The absence of a firm and dissuasive response to Iran’s acts of sabotage in the region has encouraged it to continue andstrengthen them in the way we see today,” the Saudi king said.

“Its recent criminal acts… require that all of us work seriously to preserve the security and achievements of GCC (Gulf Cooperation Council),” the king added, referring to the attacks on Gulf oil installations.

The monarch also called on the international community to use “all means” necessary to contain the Shiite power.

Saudi Arabia hosted the summits — which will be followed by a third meeting on Saturday of heads of state from Islamic nations — apparently to mobilise efforts to isolate Iran’s regime amid fears of a military confrontation.

But Iraq, caught in the middle of its two allies, the US and Iran, opposed a final statement released by Arab countries, which condemned Tehran’s behaviour in the region.

Iran responded strongly to the Saudi king’s comments: “Foreign Ministry spokesman Abbas Mousavi… rejected the baseless accusations by the heads of certain Arab countries […] and said ‘We see the Saudi effort to mobilise (regional) opinion as part of the hopeless process followed by America and the Zionist regime against Iran’,” state news agency IRNA said.

On the eve of the summits, Riyadh blasted what it called Iranian “interference” across the region and demanded “firmness” over attacks on Gulf oil tankers and pipelines.

Tensions in the region spiked after the four ships were damaged in a mysterious sabotage attack off the coast of the emirate of Fujairah on May 12.

US experts are part of a five-nation team investigating the ship attacks.

Stepping up the war of words on Thursday, US Secretary of State Mike Pompeo said that Iran was trying to raise global energy prices through the attacks on oil installations.

The US has beefed up its military presence in the region, with the deployment of an aircraft carrier, B-52 bombers and 1,500 additional troops.

Bolton however said the extra US forces were sent to the Middle East as a “deterrent” and that Washington’s response would be prudent.

“We definitely desire a change in the (Iranian) regime’s behaviour,” Brian Hook, US Special Representative for Iran, said Thursday.

Regional tensions have grown since US President Donald Trump’s administration reimposed sanctions against Iran after Washington unilaterally pulled out of a multilateral 2015 nuclear accord signed with the Islamic republic.

But Trump appeared to soften his hawkish tone towards Tehran, saying during a visit to Japan on Monday that his government does not seek “regime change”.

Through the summits, Saudi Arabia has sought to project a unified Arab front against Tehran in the face of bitter differences with neighbouring Qatar.

Qatar was represented at Friday’s meetings by Prime Minister Sheikh Abdullah bin Nasser al-Thani, Doha’s highest-ranking official to visit the kingdom since the start of a two-year-old Saudi-led boycott.

Appearing tense, the Qatari official shook hands with the Saudi king but there was no indication of a thaw.

Saudi Arabia, the UAE, Bahrain and Egypt have enforced the economic and diplomatic boycott of Qatar since June 2017, including bans on shipping, trade, direct flights, overflight and land crossings.

The summits coincide with the last few days of the Muslim fasting month of Ramadan, when Mecca throngs with hundreds of thousands of pilgrims.

The meetings take place at night, as Muslims break their day-long fasting at sunset and then go into several hours of special prayers known as Taraweeh.