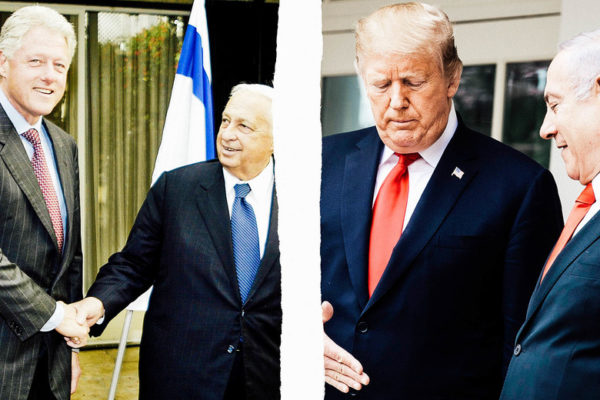 After Israeli Prime Minister Benjamin Netanyahu was reelected for an unprecedented fifth term last week, President Donald Trump declared that “we now have a better chance” for peace. After more than a year of delays, the Trump administration is expected to release the much-touted Middle East peace plan, developed by Trump’s son-in-law and adviser Jared Kushner, sometime in the coming weeks. While officially still secret, the most important features of the plan are already known.

The issue of Jerusalem, historically the most vexing of all, in Trump’s words, is officially “off the table” following the administration’s December 2017 decision to recognize Jerusalem as Israel’s capital. The same goes for any discussion of the right of return for Palestinian refugees whose families were displaced by Israel’s creation in 1948.

Instead of a sovereign Palestinian state in the West Bank and Gaza Strip, the plan reportedly calls for a form of expanded autonomy under overriding Israeli security control. Accordingly, none of the roughly 630,000 Israeli settlers now living in the occupied territories are likely to be evacuated under the plan. In return, the Palestinians would reportedly receive a massive aid package paid for by Arab states. As such, Trump’s vision is less a peace proposal in the traditional sense than a way to normalize the status quo.

While it is tempting to attribute the conflict’s current impasse to Trump’s destructive policies, the reality is that the Israeli-Palestinian peace process had been dying a slow death for many years and was effectively dead when Trump arrived. This is certainly not entirely America’s fault, but successive U.S. administrations from both parties, by failing to challenge the dynamics that define and sustain the conflict—particularly Israel’s ongoing and ever-deepening occupation—have helped entrench the status quo and reinforced the vast power imbalance between the two sides. This basic ambivalence on the part of U.S. policymakers was not the result of malice or ignorance but of the persistent tension between the desire of U.S. officials to uphold the basic rules and goals of the peace process on one hand and the demands of the U.S.-Israel special relationship and pro-Israel forces in Washington on the other. More often than not, the latter won out.

No U.S. president—before or since—has come closer to brokering an Israeli-Palestinian peace deal than Clinton. But he was also the first to break with decades of U.S. policy and U.N. precedent on key issues such as Palestinian refugees, Jerusalem, and settlements. Thus, while Clinton officially upheld the U.N.-endorsed “land for peace” formula and decried Israeli settlements as obstacles to peace, his administration also carved out major exemptions that allowed Israel to continue building in settlements for “natural growth” and in key areas of the occupied territories such as east Jerusalem.

Clinton’s most significant contribution came in the final months of his presidency following the failure of the Camp David Summit and the outbreak of the Palestinian uprising known as the Al-Aqsa intifada. Although both sides had contributed to the failure of negotiations before and after the summit as well as to the escalating violence, Clinton put the blame solely on Yasser Arafat and the Palestinians. This decision helped to narrow the political space for an agreement during Clinton’s remaining time in office and to cement the narrative that Israel had “no partner” for peace, all of which helped to fuel violence in the months and years that followed.

The Bush administration’s handling of the peace process was even more conflicted. Bush was the first U.S. president to officially endorse Palestinian statehood, but because of his alignment with Israeli Prime Minister Ariel Sharon following the 9/11 attacks and a wave of terrorist attacks by Palestinian militants, he also gave Sharon a free hand to quash the intifada, triggering accusations of war crimes, while systematically destroying Palestinian governing and security institutions along the way. Embracing Sharon’s view that Palestinian intransigence and militancy were the primary drivers of the conflict, rather than Israel’s continued occupation, Bush insisted that Palestinians end the violence and elect “new leaders” before any political progress could take hold. Yet even after the intifada had subsided and Mahmoud Abbas was elected in 2005 following Arafat’s death, the Bush administration abandoned its own peace plan, the internationally backed road map, in favor of Israeli unilateralism in Gaza and elsewhere while explicitly endorsing Israeli positions on key issues such as the fate of settlement blocs in the West Bank and Palestinian refugees.

Few events did more lasting damage to peace prospects than the Bush administration’s response to Hamas’ victory in the Palestinian legislative elections in January 2006. The election of Hamas, a group officially designated as a terrorist organization by the U.S. and EU and that has carried out numerous attacks on Israeli civilians, posed serious legal and political challenges for Israel, the U.S., and the international community. But Hamas’ electoral success was also an indication of the depth of Palestinian public dissatisfaction with both the Fatah leadership and the U.S.-led peace process.

While past U.S.presidents had spent years trying to fit the proverbial square peg in the round hole, Trump’s approach appears to be aimed at convincing us that the square is actually a circle.

Instead of encouraging Hamas’ political evolution or reevaluating problematic aspects of the peace process, U.S. and Israeli officials engineered an international boycott of the Palestinian Authority while insisting on Hamas’ removal from power. This zero-sum approach eventually led to a Palestinian civil war and paved the way for the current division between the Fatah-dominated Palestinian Authority in the West Bank and the Hamas-led government in Gaza. In addition to paralyzing Palestinian politics, the schism helped fuel violence and instability—including renewed fighting in Gaza in 2012 and 2014—and frustrate diplomatic efforts.

By the time Barack Obama came to office, both the peace process and Palestinian politics were in shambles. The 2008 Gaza war had left nearly 1,400 Palestinians, most of them civilians, dead, and about 15,000 homes damaged or destroyed. Ten Israeli soldiers and three civilians were also killed. The explosive growth of Israel’s settlement population, which went from more than 280,000 at the start of the Oslo process in 1993 to about 490,000 in 2007, stood as a testament to the enormous success of the settlement enterprise—as did the fact that parties representing the settler movement were now a key part of Benjamin Netanyahu’s right-wing coalition.

Initially at least, Obama appeared to chart a different course, taking a tough stance on Israeli settlement construction, insisting on the primacy of the 1967 border as the basis for negotiations, and even hinting at a possible policy shift toward Gaza. When faced with resistance from Israeli leaders and their allies in Congress, however, the administration backed down and focused its energies instead on the path of least resistance: a resumption of bilateral negotiations. For example, after initially demanding a comprehensive Israeli settlement freeze, Obama later settled for a temporary “moratorium” that excluded settlement in east Jerusalem and other forms of settlement expansion. In contrast with its passive response to Israeli settlements, the administration devoted considerable time and resources to defeating Abbas’ bids to seek recognition of a Palestinian state at the United Nations in 2011 and 2012. In addition to boosting his leadership’s own sagging domestic legitimacy and reaffirming a two-state solution, the largely symbolic U.N. bids would have given him some badly needed leverage in the diplomatic process.

By Obama’s second term, the peace process—as a means either of managing or resolving the conflict—existed only in name. Under Prime Minister Salam Fayyad, an internationally acclaimed state-building project in the West Bank succeeded in scaling back corruption, restoring basic law and order, and dramatically reducing attacks on Israelis. But still, Fayyad’s reforms failed to generate movement toward Palestinian statehood or an end to the occupation. The collapse of negotiations headed by Secretary of State John Kerry in 2014, followed by another Gaza war and renewed violence in east Jerusalem, only underscored the inability of peace process either to resolve the conflict or even to manage it. Despite its own warning that “the window for a two-state solution is shutting,” the Obama administration again opted for a minimalist approach, allowing an anti-settlements resolution to pass the Security Council while approving an unprecedented $38 billion military aid package to Israel.

The inertia of the Obama years left an opening for the new Trump administration, which, despite Trump’s musings about reaching the “ultimate deal,” has been far less committed to a two-state solution than any of its predecessors. While past U.S. presidents had spent years trying to fit the proverbial square peg in the round hole, Trump’s approach appears to be aimed at convincing us that the square is actually a circle.

In addition to abandoning the goal of a sovereign Palestinian state, Trump also seems determined to do away with the “land for peace” formula on which the peace process has been based for more than a half-century, as demonstrated most recently by his decision to recognize Israeli sovereignty over the Golan Heights. Indeed, the administration’s rhetoric, including scrubbing the term occupied territories from its official lexicon, suggests that it is prepared to countenance permanent Israeli control over the nearly 5 million Palestinians of the West Bank and Gaza Strip. The idea of Israel maintaining indefinite control over millions of stateless Palestinians while denying them basic civil and political rights would be morally and politically untenable, however. Without the prospect of an independent state of their own, Palestinians will have no choice but to demand equal rights in an Israeli state—forcing Israel to choose between its democratic and Jewish characters.

Despite the damage done by the Trump administration, it is equally clear that there is no going back to the failed policies of the previous 26 years. While the end of the Oslo era leaves an uneasy political and diplomatic vacuum that is unlikely to be filled anytime soon, it also offers an opportunity to rethink old assumptions. Any future diplomatic process, whether it centers on two states, one state, or hybrid models like confederation, must ensure the right to self-determination and dignity of all people between the Jordan River and the Mediterranean Sea as well as uphold basic norms of human rights and mutual accountability.

If the U.S. is going to play a constructive role in reaching such a solution, there will need to be a fundamental shift in the political conversation in Washington, from one focused exclusively on Israeli claims and needs to one that also prioritizes Palestinian experiences, grievances, and rights.