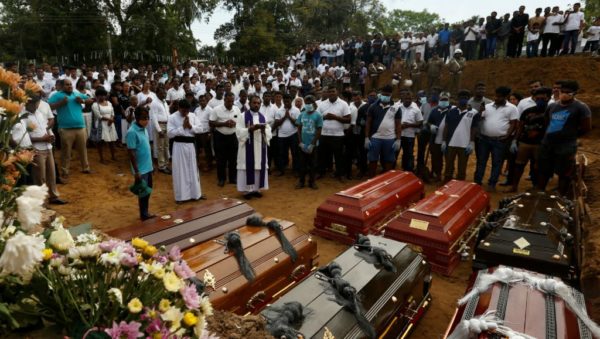 The toll in a series of suicide bomb blasts on Easter Sunday targeting hotels and churches in Sri Lanka has risen to 359, police said Wednesday, adding that nine suicide bombers carried out the attacks.

Police said 39 foreigners were killed in the attacks, the country’s worst bout of violence since the end of a Tamil insurgency a decade ago.

The additional deaths were the result of the wounded dying of their injuries. At least 500 people were injured.

Investigations confirmed the attacks were carried out by nine suicide bombers, including one woman, officials added. Eight have been identified so far.

The blasts have been claimed by the Islamic State (IS) group, with Sri Lanka‘s government pointing the finger at the little-known local Islamist group National Thowheeth Jama’ath (NTJ) but saying it likely had “international” help.

“Certainly the security apparatus is of the view that there are foreign links and some of the evidence points to that,” Prime Minister Ranil Wickremesinghe told media on Tuesday night.

“We’ve been following up on this claim, there were suspicions that there were links with ISIS,” he added, using another name for the IS group.

“Based on information, we raided three locations and arrested 17 suspects,” Gunasekera said. “Another suspect was arrested at a fourth location.”

At least 60 people have been detained since the Sunday blasts, which ripped through high-end hotels and churches packed with Easter worshippers in the capital Colombo and beyond.

The latest arrests came after Wickremesinghe said that more Islamist radicals could be on the run and he could not rule out the possibility of further bombings.

“There are a few more people on the run,” Wickremesinghe said. “So we’ve got to apprehend them.”

In addition to arming security forces with powers to detain suspects for up to three months, the authorities have also imposed a night-time curfew since the deadly attacks.

Sri Lanka’s leaders have said some of the country’s security units were aware before Easter of possible attacks, but did not share those warnings widely.

In an address to Parliament, Ruwan Wijewardene, the state minister of defence, said “weakness” within Sri Lanka’s security apparatus led to the failure to prevent the nine bombings.

“By now it has been established that the intelligence units were aware of this attack and a group of responsible people were informed about the impending attack,” Wijewardene said. “However, this information has been circulated among only a few officials.”

In a live address to the nation late Tuesday, Sri Lanka President Maithripala Sirisena said he also was kept in the dark on the intelligence about the planned attacks and vowed to “take stern action” against the officials who failed to share the information. He also pledged “a complete restructuring” of the security forces.

Alaina Teplitz, the US ambassador to Sri Lanka, told reporters that “clearly there was some failure in the system”.

Teplitz said the US had “no prior knowledge” of a threat before the bombings and declined to discuss whether the embassy or US officials had heard of NTJ prior to the attack.

“If we had heard something, we would have tried to do something about this,” Teplitz said, adding that a team of FBI agents and US military officials were helping in the investigation.

Meanwhile, New Zealand Prime Minister Jacinda Ardern told reporters in Auckland that she had seen no intelligence report to back up a claim by Sri Lankan officials that the bombings were carried out in retaliation for the March 15 mosque shootings in Christchurch, New Zealand, in which 50 people were killed.

The attacks were the worst ever against the country’s small Christian minority, who make up just seven percent of the 21 million population.

On Tuesday, grieving Sri Lankans began to bury their dead and the country observed a day of national mourning.

Three minutes of silence were marked nationwide from 8:30am (0300 GMT), the time the first suicide bomber struck on Sunday, unleashing carnage.

Flags were lowered to half-mast on government buildings, and liquor shops were ordered closed for the day.

More details have begun to emerge about some of the foreigners killed in the blasts.

The US reported at least four Americans killed including a child and the Netherlands raised their toll to three.

A Danish billionaire lost three of his children in the attacks, a spokesman for his company said.

Eight Britons, ten Indians and nationals from Turkey, Australia, Japan and Portugal, were also killed, according to Sri Lankan officials and foreign governments.

The United Nations said at least 45 children, Sri Lankans and foreigners, were among those killed.