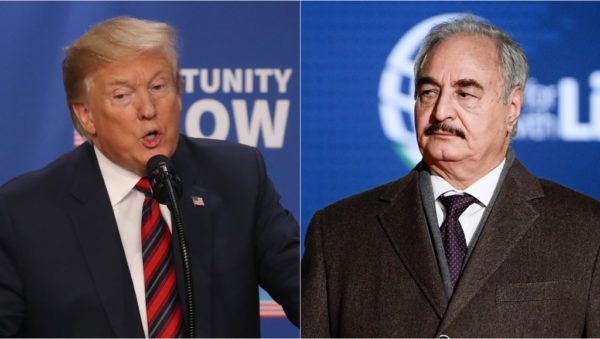 US President Donald Trump spoke by phone with Khalifa Haftar, the White House revealed Friday, as the Libyan warlord’s forces continued to push toward the heart of Tripoli with heavy shelling in the southern parts of the Libyan capital.

It was unclear why the White House waited several days to announce the phone call, which took place on Monday. Europe and the Gulf have been divided over a push by Haftar’s forces to seize Tripoli.

Shelling could be heard in southern parts of the Libyan capital on Friday, as on previous days, residents said. The fighting has killed 205 people, including 18 civilians, and wounded 913 since the start of the campaign, the World Health Organization said on Thursday.

At least 2,000 people protested on Tripoli’s central Martyrs’ Square on Friday against Haftar and his offensive, with some criticising Trump’s call to the warlord who launched a campaign from his eastern Libyan base to take Tripoli, disregarding a UN peace initiative to bring all parties in the Libyan conflict to the table.

“The call has no meaning but we will respond to it,” said Abdelrizaq Musheirib, a protester.

A spokesman for Haftar’s self-styled Libyan National Army (LNA) said Trump’s call with Haftar showed that Washington believed in the pivotal role played by Haftar in the war against terrorism.

Both the US and Russia said on Thursday they could not support a UN Security Council resolution calling for a ceasefire in Libya at this time.

Also on Thursday, mortar bombs crashed down on a suburb of Tripoli, almost hitting a clinic, after two weeks of an offensive by Haftar’s eastern troops on the capital, which is held by the internationally recognised government.

Russia objects to the British-drafted resolution blaming Haftar for the latest flare-up in violence when the LNA began its advance on Tripoli while UN Secretary-General Antonio Guterres was visiting Libya on April 4 in a bid to jumpstart a peace process between rival Libyan camps.

The US did not give a reason for its decision not to support the draft resolution, which would also call on countries with influence over the warring parties to ensure compliance and for unconditional humanitarian aid access in Libya. The country has been gripped by anarchy since Muammar Gaddafi was toppled in 2011.

Jalel Harchaoui, research fellow at the Clingendael Institute international relations think-tank in The Hague, said the Trump phone call was tantamount to supporting Haftar’s operation and thus creates “an environment where a military intervention by foreign states, like Egypt, is likelier”.

“It’s a huge boon to his offensive,” Frederic Wehrey, said of #Libyan commander Khalifa Haftar. “For the first time you have this very personal endorsement that elevates Haftar putting him in direct communication with the most powerful leader in the world.” https://t.co/J2oKoMTjTr

“One reason behind Trump’s phone call is that Haftar’s army has revealed itself less powerful than the Libyan strongman had claimed,” Harchaoui said.

Haftar was among officers who helped Gaddafi rise to power in 1969 but fell out with him during Libya’s war with Chad in the 1980s. Haftar was taken prisoner by the Chadians and had to be rescued by the CIA after having worked from Chad to overthrow Gaddafi.

He lived for around 20 years in the US state of Virginia before returning home in 2011 to join other rebels in the uprising that ousted Gaddafi.