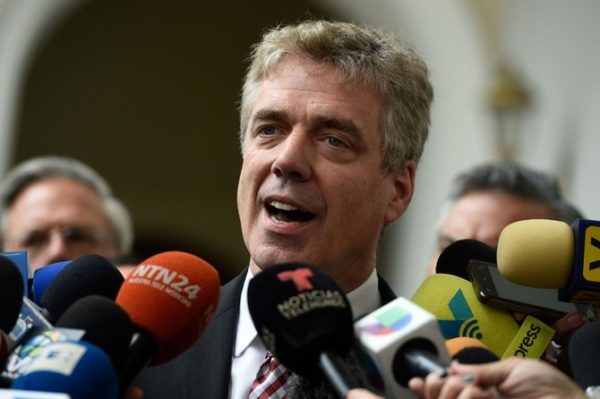 Ambassador Daniel Kriener
Share:
Venezuela’s government expelled the German ambassador on Wednesday, while press advocacy groups said an American journalist had been detained, as embattled President Nicolas Maduro cracks down on a challenge to his rule.

Ambassador Daniel Kriener was expelled two days after he and diplomats from other embassies welcomed home opposition leader Juan Guaido at the Caracas airport. The government declared Kriener persona non grata and gave him 48 hours to leave the country, accusing him of meddling in internal affairs, although it did not give specific details.

“Venezuela considers it unacceptable that a foreign diplomat carries out in its territory a public role closer to that of a political leader aligned with the conspiratorial agenda of extremist sectors of the Venezuelan opposition,” the government said in a statement.

A German foreign ministry spokeswoman confirmed Venezuela had expelled the ambassador and that the ministry was consulting with its allies on how to respond.

Most Western countries, including Germany, recognize Guaido as Venezuela’s legitimate head of state and back his plan to install a transition government ahead of free elections. Guaido denounces Maduro as an usurper whose re-election last year resulted from a sham vote. Maduro says he is victim of a coup.

Kriener, along with ambassadors and diplomats from other European embassies, had gone to the airport on Monday to support Guaido, who had risked arrest on his return to Venezuela for flouting a court-imposed travel ban to visit other Latin American countries.

On Monday, the embassy said on its Twitter account that Kriener hoped Guaido’s return “was a step towards a peaceful and political process to overcome the Venezuelan crisis.”

Separately, Venezuela’s National Press Workers Union said on Twitter that American journalist Cody Weddle was arrested at his home on Wednesday by military counterintelligence agents. Espacio Publico, a free speech group, said he had been accused of treachery and that the agents took his computer and equipment.

WPLG Local 10 News, a Miami television station that Weddle contributed to, reported on its website that management attempts to reach Weddle “have proven unsuccessful” and that his last contact with station employees was on Monday afternoon.

Neither Venezuela’s information ministry nor the U.S. State Department immediately responded to requests for comment.