Russian, US resolutions on Venezuela crisis both defeated at UN 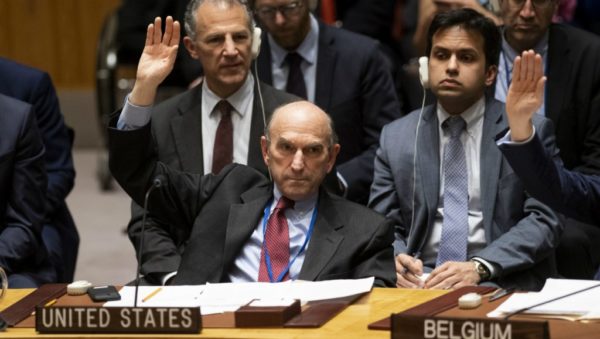 The US envoy on Venezuela Elliott Abrams votes on a US-backed resolution on Venezuela at the United Nations Security Council in New York on February 28, 2019.AFP
Share:

Russia and China on Thursday vetoed a US resolution in the UN Security Council on addressing the crisis in Venezuela, but a counter-proposal from Moscow did not win enough votes.

The failure to take action on the two competing drafts laid bare divisions among world powers over the way forward in Venezuela, which is mired in a political standoff and an economic meltdown.

The proposed US text — which called for new presidential elections in Venezuela and unimpeded deliveries of humanitarian aid — won the required nine votes at the 15-member council, but Moscow and Beijing joined forces to block it.

Resolutions at the council, which are legally binding, must garner nine votes to be adopted, with no vetoes from the five permanent members — Britain, China, France, Russia and the United States.

Seven countries including the United States, European countries and Peru opposed the Russian measure and there were four abstentions.

Battered by economic collapse, Venezuela descended into a major political crisis when opposition leader Juan Guaido declared himself interim president in January and asserted that Maduro was no longer the country’s legitimate leader.

The United States is leading a push for recognition of Guaido, who heads the National Assembly. He is now backed by more than 50 countries.

After the double vetoes, US envoy for Venezuela Elliott Abrams took an implicit swipe at Russia and China, lamenting that countries “continue to shield Maduro and his cronies and prolong the suffering of the Venezuelan people.”

Abrams expressed satisfaction that “a clear majority of the council” had supported the US stance.

France, Germany and Britain were among those that backed the proposed US measure. South Africa voted no while Indonesia, Equatorial Guinea and Ivory Coast abstained.

Asked how long it will take for Maduro to fall, Abrams told reporters: “Are we talking days, weeks or months? We hope it’s as little as possible.”

Russian Ambassador Vassily Nebenzia meanwhile accused the United States of putting forward a text that was “written for regime change, disguised as care for people. We have all seen this already in Libya, Iraq, Syria, Afghanistan.”

Venezuela’s Ambassador Samuel Moncada renewed his government’s assertions that the United States is preparing military action, referring to President Donald Trump’s statement that “all options are on the table.”

Maduro has accused the United States of using aid as a political tool aimed at overthrowing him, and blames US sanctions for the economic turmoil.

The crisis turned violent over the weekend when four people died in clashes at Venezuela’s borders during an attempt led by Guaido to bring in humanitarian aid from Colombia and Brazil.